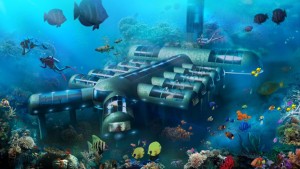 Underwater tourism may be the next big thing in luxury travel.

For just $3 million, Webb says he can construct a “single underwater guest room with elevator and support vessel” that will allow visitors to sleep about 30 feet below the surface of the ocean.

“Imagine you are in 150 feet of excellent visibility water, now what do you want to do?” says Webb of the hotel design’s endless activity possibilities. “You can scuba, hookah and snorkel and most importantly enjoy the underwater view with your significant other.”

The patented design has a functional space of 18 ft by 12 ft. Each room will be complete with a king bed, refrigerator, a living room area with entertainment space, and a bathroom. And unlike another famous undersea hotel, the Jules Undersea Lodge, no scuba gear or certifications are required of guests, making it a more accessible adventure.

Webb, who has previously promoted commercial space tourism and was one of the first funders of Google’s Lunar X Prize team, Synergy Moon in 2009, says he was inspired by Jules in Key West but wanted to create a way for oceanfront resorts to capitalize on their real estate below the sea. He says the underwater hotel assembly process is similar to that of the International Space Station.

Underwater hotel concepts are nothing new. Webb says many entrepreneurs in Dubai and Abu Dhabi have put forth larger plans, but most of them are in the $10 – $11 million per room range. The aquapods at Planet Ocean are affordable at nightly rates estimated at $3,000 to $6,000.

And unlike a traditional hotel, the Planet Ocean pods are classified as vessels because they can move around. In the event of a hurricane or other sea storm, the “rooms” can move to a safer location.

A full working prototype of the elevator and underwater guest room can be assembled in just four months. Though Webb anticipates hoteliers will initially purchase just one underwater room, he thinks once they see the revenue potential—and guest demand increases—they’ll want to expand.

“When a location desires to expand, then we’ll be able to properly design and implement a better configuration,” says Webb, noting the adaptability of the pod design.

A design for a 12-room underwater hotel is priced at $20 million.

A prototype for the design is currently being built in Key West and will be towed to Cuba for its first test at a Spanish-owned resort. Webb is currently awaiting approval from the government of the Grand Cayman islands to start building more underwater rooms.