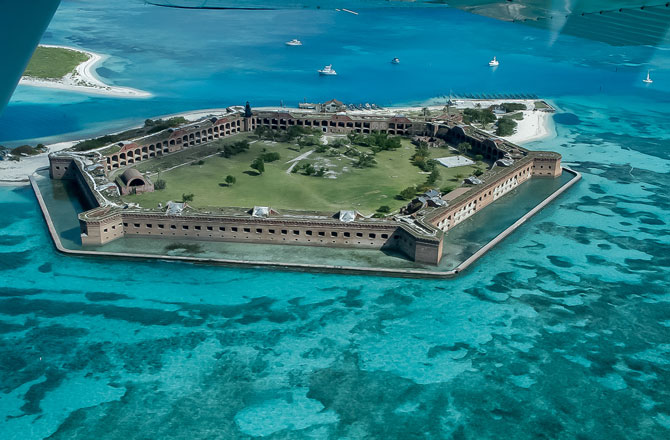 A sort of mini Alcatraz off the coast of Florida once held one of America’s most famous prisoners.

The Dry Tortugas, a small group of islands about 70 miles off the coast of Key West, Fla., were purchased by the United States from Spain in the early 1800s.

The area is one of the smallest and most remote National Parks and it protects the reefs, islands and sea life and historic shipwrecks.

It’s also the home of Fort Jefferson, built as a strategically placed military fort to combat piracy in the Caribbean.

Interruption from the Civil War and supply issues prevented completion of the fort. In 1935, Franklin D. Roosevelt declared Fort Jefferson a national monument and it became a part of Dry Tortugas National Park in 1992.

Fort Jefferson’s most famous inmate, Dr. Samuel Mudd, was infamously known for his involvement in the assassination of President Abraham Lincoln, who was shot by John Wilkes Booth. During the assassination, Booth broke his leg and sought the help of Mudd and stayed at his residence until the next day.

Mudd was later arrested for conspiracy and for harboring Booth. He was convicted and sentenced to life imprisonment at Fort Jefferson. Mudd was later pardoned by President Andrew Johnson.

“Access to the island can only be done by seaplane or by boat,” Rich said. “We saw sharks, stingrays, and shipwrecks.” Three-hundred species of birds, 30 species of coral, nurse sharks, and the occasional crocodile can also been seen in the park.