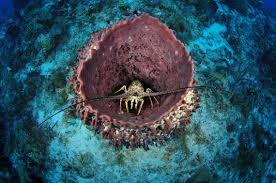 Between 2000 and 2012, the giant barrel sponge, Xestospongia muta — which can grow to over a meter tall and wide — covered increasing territory on two reefs off Florida’s Key Largo. The number of sponges per square meter increased on both reefs, on one by an average of 122 percent, researchers report in an upcoming Journal of Experimental Marine Biology and Ecology. More baby sponges attached to the reefs while existing sponges survived and grew, says study coauthor Joseph Pawlik, a marine biologist at the University of North Carolina Wilmington.

Barrel sponges are native to Florida’s coral reefs, and it’s not clear why they are suddenly increasing. Pawlik says the sponges may tolerate environmental changes better than corals do and are moving into space left behind by dead coral.

The sponges filter water and provide homes for creatures such as fish and lobster. But if their growth continues, coral reefs may be threatened. Not only do the sponges hog space that baby corals need to grow, but they can also smother corals to death, Pawlik says. And sponges can’t build a reef’s complex structure, he says. While coral skeletons provide sturdy nooks and crannies for animals to hide in, sponge skeletons are made of small glass spindles that crumble away.