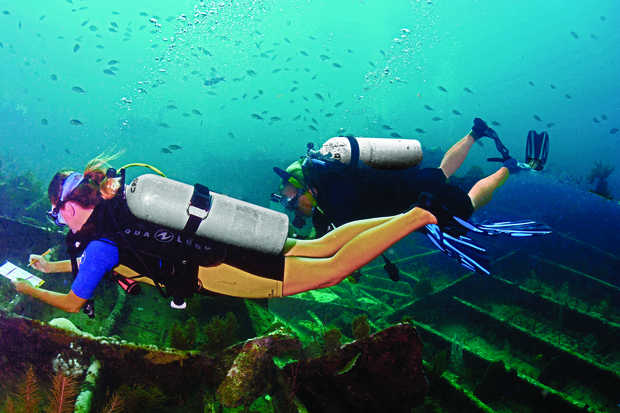 It was a busy day at the wreck of the Benwood. There were several dive boats tied to the mooring balls.

As I approached the wreck, I saw all manner of scuba divers — from those decked out in rebreathers and other technical gear to others who appeared to be finishing up dives to get their open water dive certification.

The shape of what remains of the ship appeared. I thought of Rodney Dangerfield who “don’t get no respect.” A Dangerfield one-liner came into my head: “Once when I was lost I saw a policeman and asked him to help me find my parents. I said to him, ‘Do you think we’ll ever find them?’ He said, ‘I don’t know kid. There are so many places they can hide.”

Well, the Benwood didn’t hide too well. The story goes that she was dynamited as a navigational hazard and was used by the U.S. Army for aerial target practice after World War II. But now, she has respect and is one of the more popular shipwreck dives in the Keys.

The 360-feet long, 51-foot wide merchant marine freighter Benwood was built in England in 1910 and owned by a Norwegian company. She carried ore and was armed with 12 rifles, one four-inch gun, six depth charges, and 36 bombs.

On the night of April 9, 1942, the Benwood, under the command of Capt. Torbjørn Skjelbred, was on a routine voyage from Tampa, Florida, to Norfolk, Virginia, with a load of phosphate rock. Because of rumors of German U-boats in the area, she was traveling “blacked out” three miles off Key Largo.

As fate would have it, the Robert C. Tuttle, under the command of Captain Martin Johansen, also blacked out, was traveling in the same area on the way to Atreco, Texas. It is reported that at 12:45 a.m., the Robert C. Tuttle sighted a black object and turned starboard (right) after signaling, “I intend to turn starboard,” with one blow of the ship’s whistle. There was no response from the other ship.

At 12:50 a.m., the Benwood reported to have sighted a black object off her starboard. The captain decided to turn left and sounded the ship’s whistle twice indicating, “I intend to turn port.”

Again, there was no response. Captain Skjelbred made last-minute efforts to avoid the Robert C. Tuttle by ordering the engine full astern. The maneuver failed. The ships collided. The Tuttle survived the collision but the Benwood’s bow was crushed and taking on water. The captain turned her toward land and a half-an-hour later gave orders to abandon ship. The next day the keel was discovered broken and the ship declared a total loss.

The Benwood came to rest on a sandy slope in approximately 25 feet to 45 feet of water between Dixie Shoals (to the north) and French Reef (to the south) off of Key Largo, Florida. Salvage began soon after the sinking and continued into the 1950s. Her bow was dynamited to prevent a navigation hazard and her hull was used for bombing practice.

Today the Benwood, marked by a spar buoy and six mooring buoys, is protected by the Florida Keys National Marine Sanctuary. Her peaceful remains are visited by hundreds of recreational divers. She also is an extremely popular night dive site.

The bow of the ship is the most-intact feature, forming a 25-foot profile in the water column. Large steel “knees” join the deck plate to the outer hull and sides of the vessel. These “knees” are massive reinforced triangles of steel which outline the ship’s hull shape despite the loss of the hull plates themselves.

The Benwood is a wreck that can be visited by all skill levels of divers. The added bonus is the opportunity to see the wealth of ocean flora and fauna that inhabit it.

The wreck is home to goatfish, grunts, moray eels, glassy sweepers, snapper, lobster, grouper hogfish and more. There is also an abundance of healthy of sea fans, sea whips, brain coral, sponges and fire coral. (Be careful to avoid contact with fire coral and other corals. An encounter with fire coral is painful and bumping into other types of coral will damage it.)

Night divers can be treated to a show of bioluminescent (light producing) creatures.

When I reached the Benwood I saw a young woman and man slowly finning over the wreck. She was checking off boxes and writing notes on an underwater plastic card. They were being very methodical and I ended up spotting a lot more fish than I normally would on a dive.

Turns out I was watching Ellie Splain, education program manager for the Reef Environmental Education Foundation (REEF), and Mike Anton, who Ellie was showing how to do fish identification for REEF, which is a non-profit organization whose mission is to preserve marine ecosystems through educating, enlisting and enabling divers and other marine enthusiasts to become active stewards and citizen scientists. Ellie and Mike were participating in REEF Fest, an event promoting the organization’s fish ID program.

Rodney Dangerfield once said, “When I was born the doctor came out to the waiting room and said to my father, ‘I’m very sorry. We did everything we could…but he pulled through.” Well, the Benwood didn’t pull through its encounter with the Robert C. Tuttle, but it has certainly become one of the great dive sites off of Key Largo.

For more on the Benwood wreck see: http://floridakeys.noaa.gov/shipwrecktrail/benwood.html

For more on the REEF volunteer fish survey project:http://www.reef.org/programs/volunteersurvey

Source: Wreck of the Benwood deserving of some respect | Diving | KeysNet