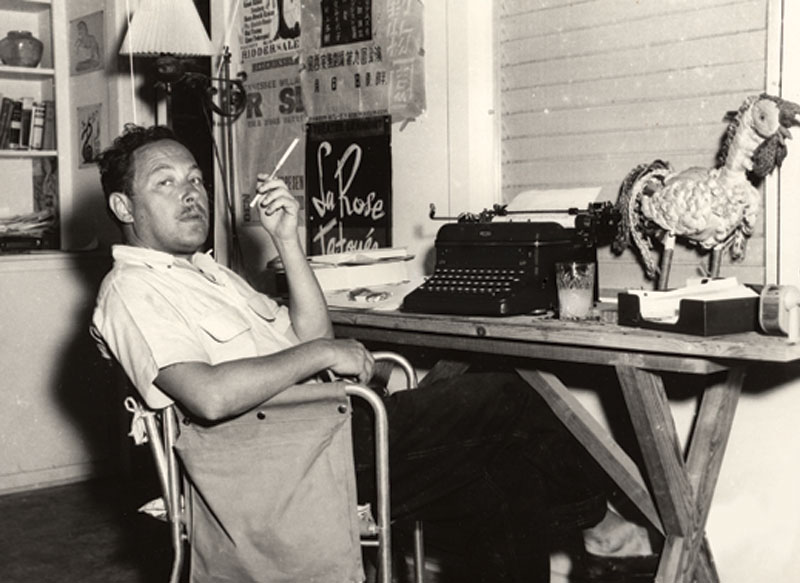 For more than 30 years internationally renowned playwright Tennessee Williams lived and wrote theatrical masterpieces in Key West. Fans can celebrate his extraordinary talent and life with a series of cultural events scheduled Feb. 22 through March 30.

Highlights of the Tennessee Williams Birthday Celebration include performances of “Talking Tennessee” with Tandy Cronyn and Joel Vig, curator-led tours of Key West’s acclaimed Tennessee Williams Museum and a gathering to honor the 109th anniversary of the playwright’s March 26 birth.

Williams first visited Key West in 1941 and subsequently purchased the 1431 Duncan St. house that became his home until his death in 1983. He completed “Summer and Smoke” on the island and wrote other classics including “Night of the Iguana.” The Academy Award–winning film adaptation of his play “The Rose Tattoo” was shot in Key West in 1954.

In 2013, Dennis Beaver and Bert Whitt opened a Tennessee Williams exhibit at 513 Truman Ave. that evolved into the museum. On display are personal photographs, rare memorabilia, video footage, the steps from the filming of “The Rose Tattoo,” one of Williams’ typewriters and other items that chronicle his years in Key West.

During the celebration Beaver is to give a presentation on Williams, host VIP guided tours of the museum and co-host a March 1 fundraiser with Whitt to benefit museum events and programming.

To commemorate Williams’ creative legacy, Key West’s Tropic Cinema, 416 Eaton St., plans to show four films adapted from his plays. Shown on Monday nights in March, the films include “Cat on a Hot Tin Roof,” “Baby Doll,” “The Rose Tattoo” and “This Property is Condemned.”

Aspiring writers can enter the celebration’s poetry and short story contests, while visual artists can compete in a themed plein-air painting challenge that recalls Williams’ passion for the pastime.

Contest awards are to be presented at the birthday party set for 5:30-7 p.m. Thursday, March 26, at the Tennessee Williams Museum.

The celebration is to culminate in two performances of “Talking Tennessee,” staged March 29 and 30 at The Studios of Key West, 533 Eaton St., and starring a pair of Broadway veterans. Joel Vig portrays longtime Williams friend Truman Capote; while Tandy Cronyn reminisces about Williams and her legendary parents, actor/director Hume Cronyn and actress Jessica Tandy, who originated the role of Blanche DuBois in Williams’ “A Streetcar Named Desire.”

Robert “The Haunted Doll” is over 100 years old and resides in a glass case at Fort East Martello Museum. Since he has come to live at the Fort many strange events have been reported. “Blame It on Robert” has become a well known excuse for pranks in Key West. None of the museum staff…

The owners of the boutique Marquesa Hotel on the corner of Simonton and Fleming streets in the Key West Historic District are vying to create a 14-room annex less than a block away. Inter-Ocean Holdings acquired the two properties that make up the Pilot House Guesthouse on Simonton Street in August for $4.2 million, Monroe…

The first full biography of Ernest Hemingway in more than fifteen years; the first to draw upon a wide array of never-before-used material; the first written by a woman, from the widely acclaimed biographer of Norman Mailer, Peggy Guggenheim, Henry Miller, and Louise Bryant. Ernest Hemingway: A Biography A revelatory look into the life and…

Writer/musician/playwright Ben Harrison tells the true macabre story of Key West’s own “Count” Carl von Cosel and his passion that defied death, for an episode titled “Grand Gestures”. Von Cosel achieved international fame in 1940 when the corpse of his true love (and former tuberculosis patient) Elena Milagro Hoyos was discovered in his secluded house…