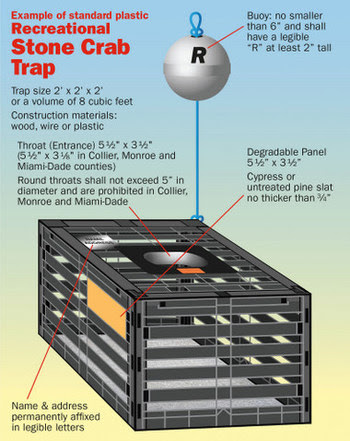 How long does it take a crab to re-grow a claw?

Once a stone crab loses a claw or other appendage it takes several molts to fully regenerate the lost appendage or claw (Figure 8). Each time a crab molts it has the ability to regenerate the lost appendage. Regeneration in adult crabs takes one year due to the seasonal molting of adult females in fall and adult males in winter. The regenerated claws start out smaller than the original and will continue to grow through subsequent molts. After three molts (three years in adult crabs) a claw can regain 95 percent of its original size. In juvenile stone crabs regeneration of lost appendages can be more rapid than adults. Juvenile crabs molt two or more times per year giving juveniles the ability to regenerate an appendage in a few months.

Stone crabs lose claws in two ways: the claw can be forcibly broken off when it is harvested by fishermen or lost in battle; or, a crab can intentionally drop any of its legs or claws if they are damaged or sick. A stone crab can re-grow either of its claws only if the joint that linked the claw to the body is left intact. This is why it’s so important for fishermen to correctly break the claws off of the crabs

What are the survival chances of the crab with one or two claws missing?

The answer to this question requires three key components:

Type of wound: Stone crabs have a much better chance of survival if the diaphragm at the body/claw joint is intact (Figure 9a). The diaphragm functions as a seal to close the wound and stop the bleeding. In the wild, the survival rate may approach 100 percent (Figure 9b). But in a fishery, the survival rate depends on the fisherman breaking the claw correctly. How the crabs are handled by the fisherman both before and after the claws are removed is also important.

The Lower Florida Keys have some well-known destinations. Lying between the Middle Florida Keys and Key West, with Big Pine Key’s Key Deer and Bahia Honda State Park’s beaches as well as one of the top diving spots, Looe Key, will keep visitors busy and happy. There are also many historic locations to satisfy any…

It was caught on a live crab and tagged in late May in the Lower Florida Keys by BTT scientists from UMass Amherst and Carleton University, and was the second fish ever tagged as part of the program. We just received word from colleagues that their receiver near Port Orange, Florida detected Helios in late…

The Research Natural Area (RNA) was designated as an area of special protection within Dry Tortugas National Park in 2007. The RNA was designed to work along with the two existing ecological reserves as a network to protect the shallow water habitats and reef fish species found in the Tortugas. Recent research shows that the…

Nature’s Corner is featuring a four-part series in June to introduce you to sharks. We’ll cover a bit of their anatomy and behaviors, some species you’ll see here in the Florida Keys and what dangers sharks might pose. For some people, their perception of sharks make them an animal of people’s nightmares. However, once you…

The Florida Fish and Wildlife Conservation Commission (FWC) took immediate action to help the Florida snook population rebound after a prolonged cold spell in January 2010. The cold snap, which led the FWC to close the fisheries, had a much greater effect on the snook population on the Gulf Coast than it did on the…