Last week, we visited Key Largo, Fla., which is the first large key on the way to Key West. One of the items on my bucket list (the things I want to do before I depart this world) has been bonefish fishing and Key Largo is one of the hot spots in the United States for bonefish. 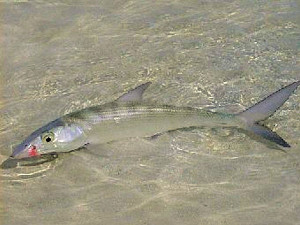 A couple of things about fishing for bonefish. First, bonefish habitat is the shallow seagrass flats on both the Atlantic and bay sides adjacent to the keys. The water is really very shallow, generally about two to four feet deep. Also, bonefish are notoriously difficult to catch. They are quite skittish and are also finicky eaters. There are two ways of fishing for them. You can sight cast. In this method you scan ahead of the boat as the captain pushes the boat slowly ahead. When you spot one you cast the bait or the lure about 10 feet ahead of them and hope that you get a strike.

This is the method that I wanted to use since I’d just gotten a new saltwater fly rod and reel. (Also, throw in four bonefish streamers which I bought at a local shop that set me back $64. They are really proud of their lures down there. I may need to start tying my own flies again since I’m on a fixed income. But I digress.) As fate would have it, the flats were a bit choppy which prevented sight casting since the fish weren’t visible from the boat. So, we resorted to anchoring the boat in strategic spots where the tide would push the feeding bonefish past our boat. We dropped four lines baited with live shrimp over the side of the boat and waited for the bonefish to come to us. And come they did. Mary hooked up with several fish and managed to boat a nice four-pounder. As a bonus, she also landed a four-foot bonnet shark, which put up quite a fight. Late in the morning before the tide changed we had an experience that our guide, Capt. Eric, said he had never experienced in his 16 years of guiding. We had three bonefish on at the same time. Pandemonium broke out!

Read More here: Mark one off the bucket list