Federal fishery managers announced last week that a new size and bag limits will be implemented in the Atlantic Ocean for one of the Florida Keys most sought after eating fish — mutton snapper — starting next month. The new recreational and commercial regulations for federal waters of the Atlantic Ocean will go into effect on Feb. 10. 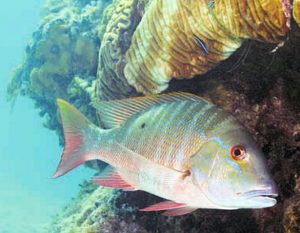 The South Atlantic Fishery Management Council agreed to increases the recreational minimum size limit from 16 to 18 inches and decreases the recreational bag limit within the 10 snapper aggregate bag limit to five mutton snapper per person per day. The size limit change alone will result in a 61 percent catch decrease, according to the staff of the Florida Fish and Wildlife Conservation Commission, which has already implemented those changes in state waters.

For commercial fishermen, the council has increased the commercial minimum size limit from 16 to 18 inches total length. The rule also establishes a commercial trip limit of 500 pounds whole weight during January through April and July through December, and it establishes a commercial trip limit during the April through June spawning season of five mutton snapper per person per day, or five mutton snapper per person per trip, whichever is more restrictive. The purpose of the trip limit is to protect fish that are aggregating to reproduce, according to council staff.

The reduction in bag limits and increase in size limits comes as a compromise as conservation groups and some fishermen called for the South Atlantic and FWC to close harvest of mutton snapper during certain spawning months and closing off certain reefs and areas such as Western Dry Rocks Reef off Key West. “It’s too little too late. They really need to protect them while they are spawning,” Lower Keys spearfishermen Don DeMaria said.

Why are the actions necessary?