In “A Gourmet’s Guide: Food and Drink from A to Z” by John Ayto (Oxford University Press, 1993), Key Lime Pie is described as “An American pie containing a lime-flavored custard topped with meringue.” It takes its name from the Florida Keys.

There is a little more to it than that. 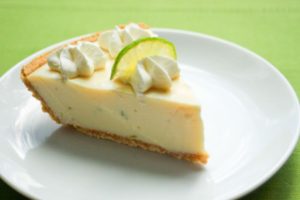 It is the official dessert of Florida Keys and Key West. Restaurants around the country serve Key Lime Pie in many forms, some true to the original and some truly bizarre variations. Everyone has their favorite restaurant version, and usually their own favorite home version. Key limes are very sour, and Key lime juice can be used to make a perfect custard-like filling for pies.

In 1965, Florida State Representative Bernie Papy, Jr., introduced legislation calling for a $100 fine to be levied against anyone advertising Key Lime Pie not made with Key limes. The bill failed.

Key Lime Pie was designated the official state pie of Florida in 2006.

Because of the Florida Keys isolation before the railroad was opened in 1912, fresh milk was hard to come by. So Gail Borden’s invention of sweetened condensed (canned) milk in 1859 came in handy. It also meant that you could make a custard pie without the necessity of cooking it. The Key lime juice by itself was enough to curdle the condensed milk and egg yolks. No one knows who made the first one. They were probably made with regular pie crusts at first, but soon the Graham cracker crust became the standard.

Real Key lime pie is not green. The pie gets its true pale yellow color from the egg yolks that predominate the ingredient list. For best results use fresh Key Limes, not bottled juice. The traditional preparation does not put any meringue on the top of the pie. This is a very simple recipe and only takes a few minutes to prepare and 12 minutes to bake.

d i r e c t i o n s (pie)
Use an electric mixer and beat the egg yolks until they are thick and turn to a light yellow, don’t over mix. Turn the mixer off and add the sweetened condensed milk. Turn speed to low and mix in half of the lime juice. Once the juice is incorporated add the other half of the juice and the zest, continue to mix until blended (just a few seconds). Pour the mixture into the pie shell and bake at 350F for 12 minutes to set the yolks.

s e r v i n g
If you are using the whipping cream garnish, prepare the cream. Serve with a dollop of whipped cream.