Tom Paul. the Islamorada Christmas Tree Guy, passed away in October before having a chance to make his 37th annual pilgrimage to Islamorada to sell Christmas trees from his Michigan farm. Paul’s son, T.J., pictured, made the decision with his family to keep the tradition alive this year. 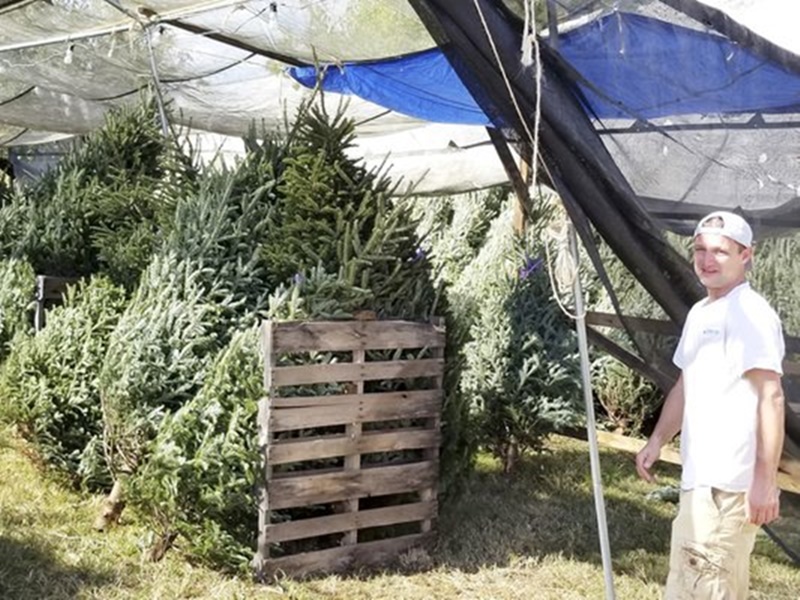 Michigan tree farmer Tom Paul and his family were considering two months ago whether or not to continue his tradition, which started in 1981, of hauling hundreds of Christmas trees south to Islamorada for sale throughout the holiday season.

Due to Hurricane Irma, there was a decent chance that Paul’s 36-year streak of bringing good cheer and a friendly face to the Keys would end.

Before the family came to a decision, according to Paul’s son, T.J., Islamorada’s “Christmas Tree Guy” passed away on Oct. 15 at age 59 in his Michigan hometown of Ludington.

Islamorada Mayor Jim Mooney became close with Paul more than 30 years ago and says that Islamorada has lost a good friend in the well-liked tree farmer, who he reports suffered from blood pressure issues and other ailments. Mooney says he looked forward to Paul’s annual visits.

“We had some good times,” he said.

After friends from the Keys traveled thousands of miles north for Paul’s funeral, son T.J. says the family was swiftly persuaded to keep the tradition going this year, despite their loss.

He has been involved with the annual Christmas season excursion for most of his life and says he plans to continue bringing trees to Islamorada after this year.

“They said (we) should come down and keep it going. My dad did this for 36 years before he passed away, so I just wanted to keep the tradition going,” T.J. said, adding that his own son, sister, and mother are also part of this year’s tree season.

T.J. also says that Irma made determining the number of trees to haul this year mostly about guesswork.

“We didn’t know if there were going to be people to sell to,” he said.

It appears that won’t be a problem, as a good part of the inventory is already gone.

“(It’s been) very busy,” he said, adding that several well-wishers from the community have dropped by to share condolences. “We sold maybe a third of what we already brought down in the first three days.”

Last year Paul and his family filled a semi-trailer with 435 trees from his farm and brought them to the village, though without Tom’s wife, Cathy, who had joined him during the holiday season for decades. Their last year brightening the Christmas season together in Islamorada was 2015.

Despite the family’s determination to carry on the tradition, the void left by Paul is sure to be felt by villagers who got to know the man Mooney has described as “an iconic figure” in the community.

T.J. knows the business, having worked alongside his father for many years after spending plenty of childhood Decembers at the tree stand. He wants to preserve his father’s tradition and his family’s connection to Islamorada.

“I’ve been doing this for about 10 years, probably more than that,” he said. “I look forward to keeping it going.”

Related Post  The Days Inn in Islamorada Under Contract - $15M

The tree stand is next to the Trading Post in Islamorada at mile marker 81.8, bayside. The hours are 9 a.m. to 9 p.m. and the stand will be in town until all trees are sold.