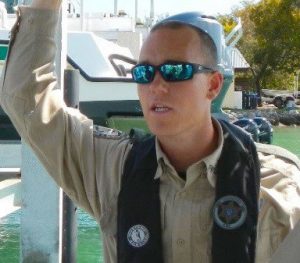 Investigator Hein was honored at the December FWC Commission meeting in Gainesville for his exemplary performance conserving marine resources and ensuring public safety through enforcement of state Boating Under the Influence regulations. Fish & Wildlife Foundation CEO Andrew Walker made the presentation on behalf of the GHOF.

“Investigator Hein was nominated by his colleagues in recognition of his dedication, teamwork in and outside FWC, and overall record enforcing state conservation and boating laws,” Walker said. “His undergraduate and graduate training in biology and ecological restoration and conservation enhances his ability to work with the public and numerous partner organizations and outdoor recreation groups.”

In addition to collaborating daily with the Monroe County Sheriff’s Office and Florida Highway Patrol, Investigator Hein regularly assists the U.S. Coast Guard and U.S. Border Patrol with migrant landings and search-and-rescue missions in coastal waters. He’s also worked with youth on Islamorada and donates fish to the Florida Keys Wild Bird Rehabilitation Center for food for the birds. He’s been honored as the Coastal Conservation Association’s 2016 Officer of the Year and, along with five of his colleagues, by Mothers Against Drunk Driving for efforts to prevent boating under the influence. He’s also a member of the FWC’s first south Florida dive team and a certified Drug Recognition Expert.

“Investigator Hein’s performance since joining the FWC in 2014 has been outstanding,” said Guy Harvey Ocean Foundation Executive Director Greg Jacoski. “His work ethic, conservation knowledge, and judgment and skill working with the public make him a strong conservationist of marine resources and protector of safety on the water.”

Investigator Hein will be receiving a $1,000 honorarium and a two-night stay at a Guy Harvey Outpost as part of the Award.

The Guy Harvey Ocean Foundation, in partnership with the Fish & Wildlife Foundation of Florida, created the Guy Harvey Marine Conservation Award to recognize sworn and non-sworn FWC employees who distinguish themselves through exemplary service and dedication to public safety and acts or accomplishments toward the conservation of Florida’s marine resources. Investigator Hein is the second FWC staff member to be honored, following Officer Philip Stone’s recognition earlier this year for his success protecting Florida’s sea turtle populations.

Ralph Delph – Now Fishing in the Great Beyond