The Florida Fish and Wildlife Conservation Commission (FWC) took immediate action to help the Florida snook population rebound after a prolonged cold spell in January 2010. The cold snap, which led the FWC to close the fisheries, had a much greater effect on the snook population on the Gulf Coast than it did on the Atlantic Coast. The Atlantic fishery was closed for nine months while the Gulf fishery remained closed until September 2013. 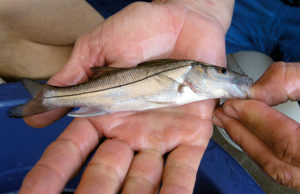 The latest stock assessment shows that catch rates for the snook populations have returned to pre-cold event levels. The quick recovery demonstrates that the FWC’s conservative management strategies resulted in abundant snook populations prior to the cold snap and that this large biomass was useful in population resilience. During the closure, spawning occurred without the threat of fishing mortality. As a result the number of young snook multiplied and adult snook grew larger.

On the heels of the 2016 Snook Symposium, FWC research administrator Luiz Barbieri explained, “Stock assessments provide objective, quantitative metrics on the status of stocks. They represent the main tool the Fish and Wildlife Research Institute uses to provide scientific advice for management of Florida’s fisheries stocks.”

The FWC manages snook in the Gulf differently than it does snook in the Atlantic because of their genetic differences and separate life history patterns. Snook from the Gulf typically inhabit a single estuary for their entire lives, while snook from the Atlantic migrate much greater distances. Snook species found in Florida are located at the northern limit of their thermal range. They can experience thermal stress when water temperatures decline in the winter months. Because snook is one of Florida’s most popular recreational fisheries, the FWC works with the fishing community to help develop management options.

For more information about Florida snook research, go to MyFWC.com/Research, select “Saltwater” then “Saltwater Fish” and then click on “Snook.”