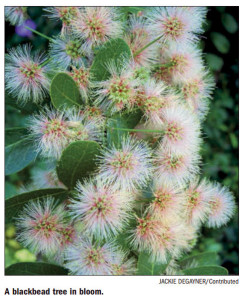 South Florida forests are known as “hammocks,” which is derived from a Native American word meaning “shade tree.” Walking into a hammock in the Florida Keys, you will see many tree trunks, and if you don’t know the trees by their bark, you will have to look up to find leaves to identify them. These trunks belong to the numerous tall trees that make up the canopy. The canopy, which is often made of intertwined, leaf-covered branches, shields everything below from the harsh rays of the sun. The smaller trees, shrubs, palms, cacti, herbaceous plants and vines that exist below the canopy are called the understory. Plants of the understory, unless they are shade loving, are usually found in areas where sunlight manages to penetrate through the canopy, along pathways through the hammock or near the edges of the hammock.

Trees of the Florida Keys Hammocks

Some interesting understory trees are the blackbeads, white indigoberry, the stoppers and torchwood. One often smells the fragrant, puffy, round, white or pink flowers of the blackbeads before they are seen. The white indigoberry has fragrant flowers and thorny branches, but what makes this plant unique is the white berry with its indigo pulp that can be used as an ink or dye. Spanish stopper and other stoppers were used as a treatment for diarrhea. Thus the name.White stoppers sometimes emit a skunk-like odor, a phenomenon for which the “how and why” is still unknown to scientists. A useful understory tree is the torchwood, a member of the citrus family and the larval host for the federally designated endangered Schaus’ swallowtail butterfly. Torchwoods contain highly volatile oils making them very flammable and therefore a good fuel. While this tree is protected from harvest today, historically it was used to make torches and sometimes was burned as incense.

Shrubs of the Florida Keys Hammocks

Shrubs of the understory include the Jamaica caper-tree and wild coffee. Jamaica caper-trees have fragrant flowers that open white and turn pink within a few hours. Wild coffee has glossy leaves with a quilt-like texture and its red fruit contains two seeds like commercial coffee “cherries.” Wild-bamboo is an herbaceous grass of the understory. It resembles a miniature bamboo and is thought to be pollinated by the wind.

Vines of the Florida Keys Hammocks

Vines also make the understory their home. The most prevalent are yellowroot, also known as mouse’s pineapple, and corkystem passionflower. Yellowroot has white flowers which become a yellow berrylike fruit that resembles a tiny pineapple. The corkystem passionflower is one of the best larval host plants for butterflies. Its small greenish flowers yield edible purple-black berries. These and many more plants grow in the hammock understory along the Wild Tamarind Trail at John Pennekamp Coral Reef State Park.

Plan a visit at FloridaStateParks.org and experience a guided walk through “the Real Florida.” Susan Matthews is a volunteer with John Pennekamp Coral Reef State Park.