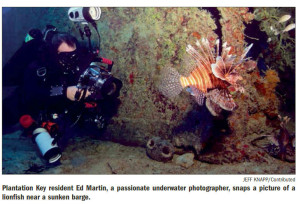 Reef Environmental Education Foundation is a Key Largo based organization that works at conserving marine environments worldwide through fish counts, lionfish derbies and other research projects it regularly conducts on the water. Since its inception in 1990, it has amassed an army of roughly 60,000 volunteers. Each year, to honor the countless hours dedicated by all involved, REEF selects one of its non-paid representatives as its volunteer of the year. For 2015, Plantation Key resident Ed Martin, 47, was chosen as the sole recipient of the organization’s award. “I was very surprised [to be selected for this],” Martin told the Free Press last week. “But I always look for ways to give back.” He also said that if it wasn’t for his wife, Stephanie, who gives him free rein when it comes to REEF activities, none of this would be possible. “The award is as much hers as it is mine,” Martin said.

REEF Director of Special Projects Lad Adkins said the criteria for the honor revolves mostly around a volunteer’s participation in fish counts and lionfish collection efforts as well as any monetary contributions gifted to the organization. “Ed has always taken those extra steps to go above and beyond the call of duty,” Adkins said. “Plus we have a very small staff, so volunteers like him play a key role.” Martin, a Maryland native and Navy veteran, said he first got involved with REEF roughly four years ago after attending its fish seminars and also getting a bit of a push from his close friends Carlos and Allison Estape, who actually took home the REEF volunteer of the year award as a couple back in 2013. “It is infectious,” Martin said of the opportunities within the organization. “Plus it’s a lot of fun.”

Martin, a certified diver since 2008, has conducted roughly 60 fish counts and said he has quite a bit more that still need to be filed. He has done them as far south as Key West and as far north as Palm Beach. Martin is also a member of REEF’s Century Club. To obtain that mark, one must record at least 100 different fish species on a single tank of air. He boasted that he had reached that at least a dozen times. Fish counts, according to REEF, help provide a rough estimate of the population of a species in a given location. Through recreational dive trips, volunteers record what type of fish they encounter and about how many as well as their location. The counts are then compiled and used for research projects, among other things.

Martin has also participated in a handful of lionfish derbies, held periodically throughout the state by REEF. The contests are just one effort to help rid the invasive species from Florida’s waters, as the fish has no known natural predator and has rapidly taken over through predation and reproduction. Martin estimated that he has killed more than 1,000 lionfish through both derbies and personal dive trips. Also an avid amateur underwater photographer, Martin has aided REEF when it comes to that skill. Some of his work can be seen on the organization’s online site as well as at their headquarters. “I figure I always will be doing something with them,” Martin said of REEF. “Their work is just really important.”

Aside from its hefty membership across the globe, REEF employs just 10 part and full-time staffers at its mile marker 98.3 headquarters. For information on volunteer opportunities within the organization, visit reef. org or contact its headquarters in Key Largo at 305-852- 0030.

Wondering how you can help in the fight against the decline of corals? With a new smartphone app called OkCoral, the Coral Restoration Foundation is hoping it can answer that question by turning underwater photographers into a citizen scientists. Florida Reefs The idea behind the app is getting recreational divers to help monitor the health of coral clusters that the foundation…

An Annapolis firm is turning a Florida community’s waste into mulch, with long-term plans of transforming it into electricity. Last year, Energy3 — which designs, builds, operates and finances municipal energy products — became the yard waste hauler for Monroe County, Florida. Currently, the waste is taken to Moore Haven, Florida, where it is being turned…

The failed Port Bougainville housing and marina project from the late 1970s and early 1980s that is located within Dagny Johnson Key Largo Hammock Botanical State Park will soon be a thing of the past. Work began there last month to raze what remains of a planned 406-acre development of condominiums, townhomes and yacht basins….