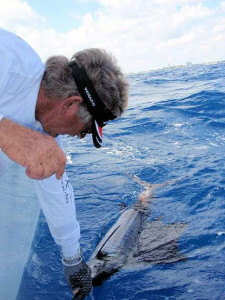 A classic sportfishing photo scene — a happy angler holding a just-caught sailfish before releasing it — could become an expensive snapshot.

“This is not something new,” Randy Blankinship of NMFS’ Highly Migratory Species Division said Wednesday. “We understand some people are not aware of the rule but it has been around for a while.”

A marlin or sailfish not harvested “must be released immediately to improve its chances of survival without removing it from the water,” states the NMFS’ recreational-fishing Atlantic guide to “highly migratory species” like billfish, sharks and tuna.

In a typical violation case pursued by NMFS, the civil fine on a first offense often runs about $500, Blankinship said.

Not all billfish taken aboard a boat for a photo die after release, Blankinship said, but possible physical damage or disorientation “greatly increases” the likelihood of death.

While the number of sailfish brought to Florida Keys docks has significantly dropped in recent decades due to an evolving environmental ethic, actually boating and killing a sailfish is not illegal.

Legal-size sailfish (lower jaw fork length more than 63 inches) can be harvested with proper licenses and permits. Harvested billfish must be reported to regulatory agencies.

“Angler attitudes have changed over time,” Blankinship said. “Catch and release has become the norm for much of the [migratory] fishery, and that’s very good for conservation of the billfish resources.”

He continued, “That’s all the more reason why pulling a fish out of the water for a photo is detrimental to the goal.”

To some Keys charter captains who require anglers to release billfish, the potential of being fined for getting a quick photo makes little sense.

“This is one of the most ridiculous things I’ve ever heard,” said Chris Johnson of SeaSquared Charters in Marathon.

A Keynoter fishing columnist, Johnson forwarded the photo published Nov. 11 but noted it was not taken aboard his boat.

“These photos are in every fishing magazine you see,” he said. “We want the sailfish alive. It behooves us not to kill them so we can catch them again.”

“Nobody keeps a sailfish for 15 minutes. We know how to revive and release them,” Johnson said.

“If a guy wants a picture, we know how to get the fish out of the water right and make sure everything goes right,” Falcucci said. “It’s all good. It doesn’t take long. The fish should be fine.”

Sailfish laws in Florida state waters do not have any restrictions on pre-release photographs, although most sailfish and marlin are caught farther offshore in federal jurisdiction.

“It’s very hard for anybody to understand rules that keep changing,” Leopold said. “Inconsistency is [the agencies’] fault and they need to get their act together.”