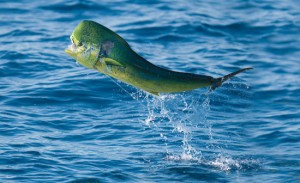 The head of the Florida Keys Commercial Fishermen’s Association contends that a proposed increase to the dolphin fish allocation to the commercial fishing sector does not go far enough.

Federal fishery managers announced this week that it will take public comment on the proposal through Oct. 29. Public hearings will be held in mid-November via webinar and listening stations. The council’s intent is to approve the amendment during its December meeting and get the new trip limits in place by next spring, South Atlantic spokeswoman Kim Iverson said.

“The council wants to help ensure that the catch limit is not exceeded and the season remains open,” Iverson said. “Implementing a trip limit after a percentage of the ACL (annual catch limit) has been met will still allow harvest by the larger pelagic longline vessels and also allow the season to be extended for vessels with smaller landings. … The new trip limit along with the increase in the commercial ACL by changing the allocation should extend the season and hopefully prevent another commercial closure.”

Florida Keys Commercial Fishermen’s Association executive director Bill Kelly contended the proposed allocation is not enough. He argued that the recreational sector only catches about half of its 14 million-pound allocation. Kelly proposed federal fishery managers increase the commercial catch in 5, 10 or 20 percent increases a year, depending on how much the recreational side of the fishery harvests the previous year, he said. The South Atlantic and National Marine Fisheries Service could look at the harvest data each year and make adjustments. “The fishery was closed at the peak time in the Keys, and the Keys are the dolphin capital of the South Atlantic,” Kelly said.

Upper Keys restaurant owner and fisherman Mike Forster said the dolphin fishery issue shows that there needs to be greater Florida Keys representation on federal fishery councils. “We have a dog in the fight, but not a seat at the table,” Forster said.

Electronic or hard copies of the proposed rule may be obtained from National Marine Fisheries Service website.

If you are familiar with the Florida Keys’ marine world, you’ve probably had an experience with Florida Keys Sharks. When you see a shark, the excitement of your experience is often elevated. Sharks have inspired fear and respect via movies, books and even “Shark Week.” It is important to dispel the myths of vengeful man-eaters…

The Florida Fish and Wildlife Conservation Commission (FWC) approved several conservation measures that are consistent with federal rules and set a new state management boundary for hogfish at the November meeting in St. Petersburg. “Hogfish is an economically important species that is popular with the diving and angling community,” said Chairman Brian Yablonski. “This was…

Fishing is one of the most accessible outdoor sports. Nearly anyone, no matter age, income level or even fitness ability, can easily participate. And the sport is no longer the boys’ club it was once thought of either. Of the 46 million Americans who fish today, over one third of them are women, according to…

Looking to keep up to date on Florida’s saltwater fishing regulations? Find them on Fish Rules App. The Florida Fish and Wildlife Conservation Commission (FWC) is excited to announce it is now partnering with Fish Rules App. In addition, a new freshwater version of the app is being created and is anticipated to be rolled out later…

“What’s going to happen when the season starts is always the question,” said Bill Kelly, executive director of the Florida Keys Commercial Fishermen’s Association. “I’m optimistic that things will be good,” said Marathon fisherman Richie Stiglitz, who grew on his family’s lobster boats. “As long as the price is good, we could all make some…