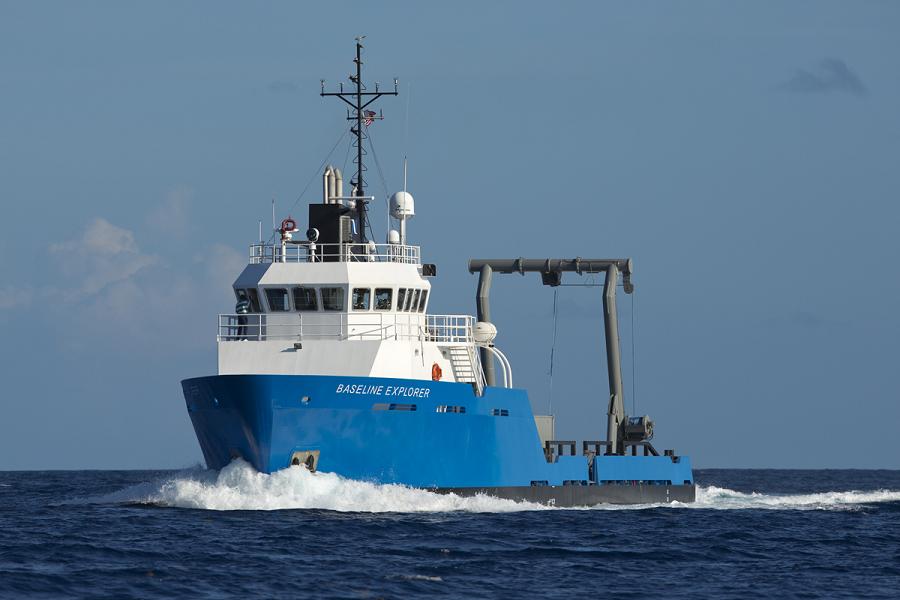 Project Baseline scuba and manned submersible diving teams will conduct operations from the 146’ long mobile diving platform, the Baseline Explorer, to advance 30 years of ongoing research by systematically documenting the health of reefs in the Florida Keys, FL. The teams will dive coral reefs between Key Largo and Looe Key to document the connection between nutrient loading resulting from wastewater disposal and reef health.The Baseline Explorer will be off shore of the Florida Keys from June 11-14th, 2015. The privately owned research vessel will serve as a temporary home to an advanced scuba diving team, manned submersible pilots, and researchers. Dives will be conducted each day to various depths at a number of locations throughout the Keys, including the long-term study area at Looe Key National Marine Sanctuary, which lies roughly six miles south of Cudjoe and Summerland Keys.

Each mission will leverage the mobility and coordination of technical dive teams directed to collect algae samples and High Definition video transects from target locations. Algae samples will be shipped to the University of Georgia, Center for Applied Isotope Studies, and undergo analysis for carbon and nitrogen isotopes. This analysis helps researchers identify the source of nutrient overloads that reach coastal areas. Two manned submersibles deployed from the deck of Baseline Explorer will provide additional location scouting and exploration assistance to the dive teams. The submersibles will also provide researches with a unique opportunity to view their study areas (in some cases for the first time) without being subject to the physical rigors of exposure to underwater environments.Long-term water quality monitoring at Looe Key Reef in the Florida Keys has been taking place for decades and represents the longest low-level nutrient record for a coral reef anywhere in the world. Research has found that increasing nitrogen from land-based sources has led to algal blooms, coral disease and die-off and growth of seaweeds and sponges, which have transformed reefs in areas of the Caribbean adjacent to increasing human activities.

This is especially true in the Florida Keys, which now have the lowest coral cover of any reefs in the wider Caribbean region. Long-term water quality monitoring at Looe Key in the lower Florida Keys since 1984 showed significant increases in dissolved inorganic nitrogen in the early 1990s following increased flows of sewage from the Keys and agricultural runoff from the Everglades. The increased nitrogen loading crossed a “tipping point,” where unprecedented algal blooms were followed by an uptick in coral diseases, coral bleaching, and the dramatic loss of living coral. Research indicates that increased nitrogen loading has fostered eutrophication and algal blooms that are taking an increasing toll on coral reef health. It is also clear that if actions aren’t taken soon, Florida will not have sufficient living coral to even be considered as a location for coral reef research or diving tourism.

Eutrophication is the over-enrichment of water by nutrients such as nitrogen and phosphorus, which sets in motion several debilitating effects on coral reefs. In 2008, The World Resources Institute identified over “415 areas worldwide currently experiencing eutrophication symptoms, [with] significant information gaps in many regions.” Project Baseline supports research that is often out of reach for many government and academic research institutions due to challenging underwater accessibility issues, limited qualified human resources, and funding limitations and cuts.

In addition to logistical support, Project Baseline advances part of its mission “to foster public awareness” by sharing the research process and results with the public in an accessible manner through both traditional outlets and social media. Student groups and professors from the Florida Institute of Oceanography, Florida Keys Community College, University of Miami and Harbor Branch Oceanographic Institute have been invited to tour Baseline Explorer and learn first-hand about ocean exploration and research while diving operations are taking place. Dr. Todd Kincaid is a 30 year veteran of deep ocean and record setting cave dives in Florida. He is the central agent behind the advancement of Project Baseline’s mission to document and share underwater conditions through time so that the public is presented with a clear picture of “then” vs. “now.”“When I learned how to dive in the Keys, almost the entire coral reef was alive. In the last 15 years, we’ve lost 60% of the living coral reef. Yet, when people dive in Florida for the first time they still think it’s beautiful. That “baseline” for environmental quality is shifting. It will continue to shift until we can present the public with a picture that clearly demonstrates what a pristine reef looked like 25 or 50 years ago contrasted with a picture that shows the condition the reefs are in today.”State and County officials continue to investigate advanced wastewater treatment systems designed to replace the many tens of thousands of septic systems, one of several land-based pollution sources that have been discharging high nitrate water into the nearshore environment in the Keys for decades.

Still under contention is the ultimate destination reached by water that undergoes advanced treatment. Deep well injection ensures treated effluent doesn’t reach the ocean. A method that is substantially more expensive to develop, but also offers coral communities much needed relief from excessive nutrients. Some consideration is being given to shallow wells. If the Florida Keys approves the shallow well injection process as an alternative wastewater management plan, little improvement in Looe Key area can be expected. The resulting water will still be over an order of magnitude above natural background levels and nutrient levels harmful to coral communities will continue to find its way to the ocean.

By revisiting this location, researchers hopes to have data in place to document the probable impacts of new shallow-well wastewater injections that are slated to occur in Cudjoe Key, roughly six miles north of Looe Key National Marine Sanctuary. The data during this mission will help to prove impacts in the Looe, Big Pine and Cudjoe Keys associated with the concentration of all Keys wastewater discharge into wells on that island. Environmental groups focused on reef health in the Keys are advocating for deep well injection on the basis of existing research.

Source: Key West the Newspaper – 30 Years of Research in the Florida Keys Continues by Documenting Effects of Pollution on Shallow and Deep Coral Reefs –