The American white pelican is a true “snowbird.” American white pelicans spend their summers inland, breeding on isolated islands on freshwater lakes in the northern Great Plains. Unlike brown pelicans, which make their nests in trees, white pelicans nest on the ground. Pelican females typically lay two eggs that they incubate with their large webbed feet. The pelican’s eggshells need to be strong to withstand the weight of the bird. During mid-20th century there was a great decline in pelican numbers due to the use of pesticides that weakened the egg shells. Luckily, pelican numbers have rebounded with the ban of these hazardous chemicals.

Pelicans often have two hatchlings, but usually only one chick survives to adulthood. What happens is called siblicide, where the stronger chick kills the weaker chick in the competition for food. Because white pelican parents work hard to provide the 150 pounds of food it takes to raise a child to adulthood, this behavior ensures that each pair can raise at least one healthy chick. Ten weeks later, when the chick is weaned and fending for themselves, the new family migrates south. Large groups of pelicans migrate in V-formation to their wintering grounds along the coasts of the United States. In the Florida Keys, white pelicans can be found feeding in shallow bays and estuaries and are most often seen in groups of 10 or more. 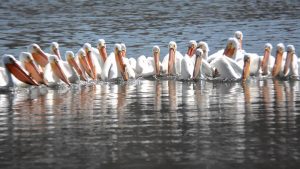 During feeding, they will form a line and work cooperatively to corral schools of fish from deeper water into shallower nearshore waters. As they move forward, they take turns lunging to scoop up the fleeing fish in their beaks. White pelicans can be found congregating in big groups on isolated mangrove islands at night. These isolated islands help protect them from predators. White pelicans are much shyer than brown pelicans and are easily distressed by humans. Observing them is better done from a distance so you do not disturb their behavior. A pair of binoculars comes in handy when searching for the white pelicans.

To look for them in “the Real Florida,” check out the many Florida State Parks along the coastline this winter by visiting floridastateparks.com to plan your trip. Becky Collins is a park ranger at John Pennekamp Coral Reef State Park.

A rare hybrid hawksbill-green seaturtle Maisy, rehabilitated at the Florida Keys-based Turtle Hospital, was fitted with a satellite-tracking transmitter and released from a Florida Keys beach Friday to join the Tour de Turtles, a marathon-like “race” that follows the long-distance migration of sea turtles over three months. The annual educational project, organized by the Sea…

The drive “Save the Key Deer” that started in 1950 issued a progress report. A survey when the drive began showed not more than 30 of the deer existed; in three years, the number had nearly tripled. Today: Estimates of the Key deer population have increased by about 60 percent from a 2004 estimate of 500…

“You broke my heart, ‘cause I couldn’t dance; you didn’t even want me around; and now I’m back, to let you know, I can really shake ’em down. Do you love me now that I can dance?”  (Lyrics from the 1962 Contours’ song “Do you love me?” written by Motown’s Berry Gordy, Jr.) What does the…

Everyone in the Florida Keys seems to have a story about an encounter with our fascinating sea life. Our visitors especially love to tell about seeing an endangered Florida manatee. While Florida’s manatees have been known to travel as far north as New Jersey and Massachusetts, they, like all good Floridians, return to warmer waters…

One animal that comes readily to mind when you think of the term “laboratory animal” is the venerable rat, a rodent that is as ubiquitous as it is reviled. Not all rats are “guinea pigs” for the lab, however. Some are highly prized for their rarity, such as Florida’s Key Largo woodrat.   The Key Largo woodrat (Neotoma…

A man was jailed Tuesday after police said he was caught on Duval Street with three large iguanas whose legs were “hog-tied” with duct tape as they dangled from his bicycle’s handlebars by wire. Jeremy Dugas, 35, of Key West, remained in the Stock Island jail Wednesday in lieu of $5,000 bond, facing a misdemeanor…