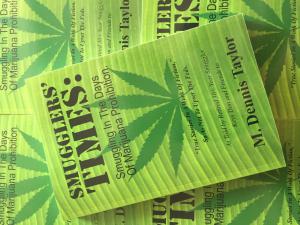 Smugglers’ Times: Smuggling In The Days Of Prohibition

Smugglers’ Times: Smuggling In The Days Of Prohibition. Logo for website

This memoir details real stories of real people who worked in the marijuana smuggling industry.

“I tell about the life of a smuggler. When marijuana is legal all over, we will be like the rumrunners during prohibition and people might be interested in the true history of Smugglers’ Times.”
— Keys Don, Retired and Reformed Smuggler

This new memoir, 45-years in the making, details adventure and humor — successes and screw ups. These are real stories of real people who might have lived down the street and who worked in the marijuana smuggling industry in the 70s, 80s and 90s.

Long-retired and reformed Keys Don, as he is still known today, flew single-engine planes in the 1970s back and forth to Colombia, carrying up to a million dollars-worth of pot per load, in today’s money and finally told his story to award-winning writer, M. Dennis Taylor.

The amazing tale is now spun invitingly in the book Smugglers’ Times: Smuggling in the Days of Marijuana Prohibition that is available from fine bookstores, Amazon Books or SmugglersTimes.com.

With a new website, SmugglersTimes.com, that supports the memoir of the history of the marijuana smuggling industry as it was in the roaring days more than a generation ago. It gives samples from the book and information about the authors.

“I tell about the life of a smuggler,” said Don. “When marijuana is legal all over, we will be like the rumrunners during prohibition and people might be interested in the true-life history of how it was in Smugglers’ Times.” He continued with words from the book.

“Everyone on the Golden Eagle and the three Aqua Sports and at the Oasis off-load house heard it, with no explanation as to why. ‘Go to plan B,’ Tom said with panic in his voice and Captain Dirk responded that he was going north to Tavernier Creek light.” Why he chose to go north and not farther south, nearer the Oasis, is something his drug-addled brain probably didn’t even know. But he turned north as everyone on the whole scam looked at one another thinking the same thing. “There was no ‘plan B’ ever discussed.”

It was before the team could regroup that the Marine Patrol coming out of Tavernier Creek on a routine patrol spied it and was overheard on the scanner. “We have a bogey coming across the reef and I can see bales stacked up on the stern,” said the Marine Patrol…

During a 30-plus-year career, working under aliases, Don brought marijuana through the Florida Keys, a haven for smugglers since the times of the Spanish Main up until sometime late last night. Don and his friends used planes, boats and vehicles, and expanded connections throughout the states, Mexico and the Philippines, reportedly even working with Federal Agents.

A brisk-read written in journalistic style by Taylor, a South Florida writer with 40-years of experience in writing newspaper and magazine pieces, Smugglers’ Times: Smuggling In The Days Of Marijuana Prohibition is Taylor’s third book. “It’s a fast-moving tale filled with adventure, humor and an in-depth look behind the scenes of the smuggling industry,” said Don.

Smugglers’ Times: Smuggling In The Days Of Marijuana Prohibition is available on Amazon.com or by visiting SmugglersTimes.com.

Little Palm Island Resort & Spa is a piece of paradise discreetly located off the fabled Florida Keys coastline so remote it’s only accessible by sea-plane or boat. A best-kept secret for US presidents and celebrities, your escape is simply waiting to drink you in. No phones, no TVs and no shortage of fun and romance….

1855: Northwest Channel Lighthouse was first lighted. This lighthouse was located eight miles (13 km) from Key West, Florida, at the entrance to the northwest channel to the Key West harbor. The first light was a lightship put on station in 1838. It is not known if the lightship survived the Great Havana Hurricane of 1846, which destroyed…

Lighthouses in the Florida Keys have a tough task to manage. The area is not only strewn with coral reefs and shoals, but is also a favorite highway for destructive hurricanes and other storms. The Sand Key Lighthouse, the southernmost lighthouse in the United States, has been in operation since 1827, and has borne witness…