If you live in Florida, you’re probably familiar with some of oil tycoon Henry M. Flagler’s work including the Florida Keys Overseas Railroad. Back in the early 1900s, Florida was a popular winter destination for the upper crust, and some of the Florida’s most extravagant works of architecture were commissioned by Flagler himself.

Flagler College (Ponce de León Hotel) in St. Augustine and Whitehall, the impressive mansion that is now the Flagler Museum, in Palm Beach serve as reminders of his influence, as well as many monuments across the state like the Florida Keys Overseas Railroad.

These treasured landmarks remain in good condition, but even Flagler wasn’t infallible. In 1905, the industrialist decided to extend the Florida East Coast Railway beyond Miami, all the way to Key West. He hoped to profit from this more than 100-mile extension by having the best available access to Cuba and the proposed Panama Canal. 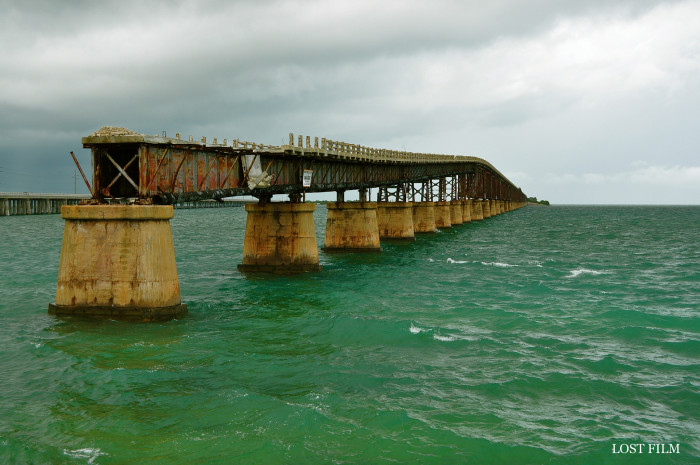 As you can imagine, the construction was difficult, dangerous, and very expensive. Three hurricanes threatened to derail the project, but Flagler pressed on. It was completed in 1912 and what had originally been referred to as “Flagler’s Folly” suddenly became “The Eighth Wonder of the World.”

In 1935, nature delivered a fatal blow when a Category 5 hurricane took out a large part of the middle section of the railroad and made it unusable. No one wanted to cover the expense to repair it, so the land was sold to the state, which soon afterward began building the Overseas Highway over salvageable portions of the structures that remained. The highway was rebuilt in the 1980s, and it now runs alongside some of the railway ruins, which Florida has converted into fishing piers and walking paths called the Florida Keys Overseas Heritage Trail.

Check out the original post by Victoria W for more great pictures Source: The Story Behind the Abandoned Florida Overseas Railroad