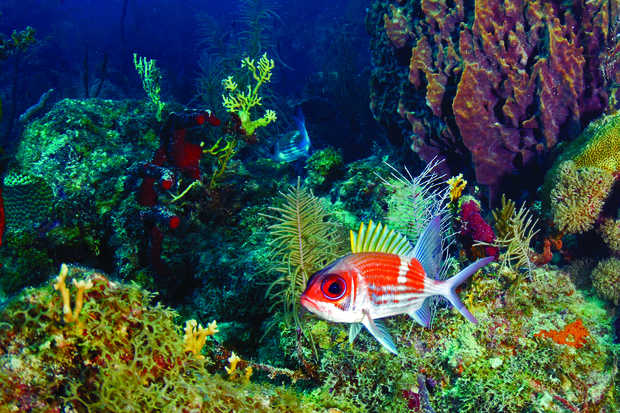 Why am I taking an underwater photo of a squirrelfish (Holocentrus adscensionis)? Is it because of its big “squirrel-like” eyes and beautiful colors? Yup!

If you are a big, scary or sought after game fish you get media coverage, especially in a place like the Florida Keys.

Tune your radio to a local frequency and you will likely hear some fishing boat captain giving you a report on the great fish catch of the day.

Even lobsters get a lot of coverage — especially if a big one is caught or somebody breaks the rules in hunting for them.

So, being aware of what is popular — and to make up for my lack of being a “popular” kid in junior high school – when on a scuba dive with camera in hand  I look for images that will  have  a “wow” factor such as sharks, eels and stingrays. I also go after other eye catchers like wrecks, kids and pretty girls. If I could get an image of a cat in scuba gear next the Buddha statue on Davis Reef I would probably get hundreds of likes on Facebook. Just kidding, I would never take cute little fluffy into the ocean.

I was fooled once. I wrote a story on seagrass and got over 800 likes. But, to be fair, that was on the Florida Keys National Marine Sanctuary’s Facebook page where folks “like” esoteric stories about things like seagrass.

Let’s get back to squirrelfish. I was on a dive a few weeks ago finning through the barrel sponges hoping to get an image of a sea monster, giant shark or maybe some lost pirate treasure. Up swims a squirrelfish. It glanced at me with a sad “what am I chopped liver?” look in its big eyes.

Having raised kids and now being a grandparent, I thought of the correct answer, “everyone is special in his or her own way Mr. squirrelfish.” (I know, some of you reading this think “this columnist dude was ‘narced,” a scuba diver’s term for the intoxicated-like condition that divers experience on deep dives from breathing high concentrations of nitrogen.)

I wasn’t “narced” but I do think squirrelfish are pretty cool. For example, they can vibrate their swim bladders and make clicking and grunting noises to communicate when protecting their territory.

One species, the longspine squirrelfish, is believed to make different sounds depending on the type of threat it faces — a single grunt when challenging another fish that presents little threat or a series of clicking noises signaling the need to retreat from a big fish. Squirrelfish live in the western Atlantic Ocean from North Carolina (US) and Bermuda, south to Santos, Brazil including the Gulf of Mexico and in the West Indies and Caribbean.

In the eastern Atlantic, squirrelfish live in tropical and subtropical waters including St. Helena and Ascension Island and along the African coast from Sao Tome Island and Gabon, south to Angola. They can be found over 500 feet deep but the more typical maximum depth is around 100 feet.

The squirrelfish is a night critter. It usually hides in crevices and under ledges in coral reefs during daylight to avoid being eaten. It swims over sandy bottoms or seagrass beds at night to feed on crab larvae, shrimp larvae, small crustaceans (i.e., hard shell, segmented body, and jointed appendages) and juvenile fishes. Adults tend to loners within established territories. Juvenile squirrelfish, which are thin and silvery, are rarely seen because they live out in the ocean waters before settling into suitable habitat.

Squirrelfish have moderately compressed oval shaped slender bodies and big “squirrel-like” eyes. Their backs are reddish and their lower parts are white. The fins on their backs are yellowish to yellowish green, others are whitish.  Squirrelfish, which become sexually mature at about 5.7 inches, grow to about 10 inches long. The maximum recorded length is 24 inches.

Squirrelfish spawn throughout the year in warm waters and only in the summer months of higher latitudes when the water warms up. Predators of squirrelfish include the dolphinfish, mutton snapper, yellowfin tuna, longlure frogfish, and sea birds such as the brown noddy and the sooty tern.

Some folks in Brazil and Venezuela catch squirrelfish with traps, hand lines, and gillnets. It is sometimes sold fresh but has limited commercial value because of its small size, rough scales and spines. Squirrelfish can survive for days in traps and highly polluted waters.

Squirrelfish often are displayed in public aquariums. The big and scary fish may get the “wows” but it’s hard to beat a pretty face. So, pretty little squirrelfish, don’t it let your lack of recognition make your “brown eyes blue.” (Lyrics “Don’t It Make My Brown Eyes Blue” written by Richard Leigh, and recorded by American country music singer Crystal Gayle.)

Source: The squirrelfish deserves some ink too