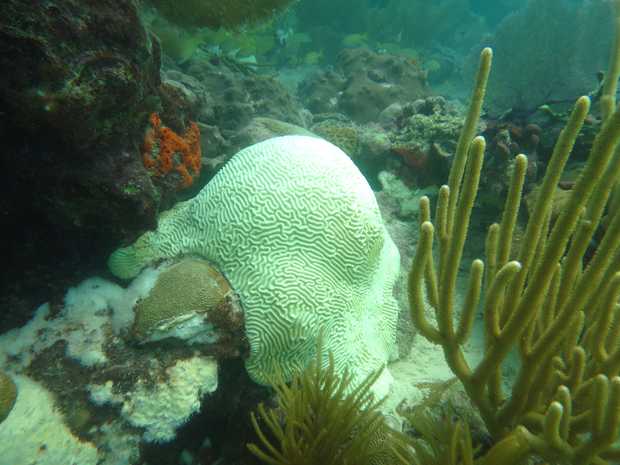 “Water temperatures went down about five to six degrees in a week while we were doing [reef] surveys in the Middle Keys,” said Meaghan Johnson of The Nature Conservancy’s Florida Reef Resilience Program.

“That was before the winds,” she said, “which should help alleviate the thermal stress on corals.”

Water temperatures at the Keys reef hit 86 degrees Fahrenheit — warm enough to cause serious coral bleaching — in August in September.

“We did see significant coral bleaching in the Keys similar to last year, which was bad,” Johnson said.

The Coral Bleaching Early Warning Network, a joint project of Mote Marine Laboratory and the Florida Keys National Marine Sanctuary, reported Oct. 12 that “most areas of the Florida Keys National Sanctuary have been reduced to ‘No Stress’ [status], indicating that although previous thermal stress exposure may still be adversely impacting corals, recovery may be underway.”

“Waters are warming in the Caribbean, threatening coral in Puerto Rico and the U.S. Virgin Islands,” the agency reported. “Coral bleaching began in the Florida Keys and South Florida in August, but now scientists expect bleaching conditions there to diminish.”

Coral bleaching occurs when overly warm waters cause the living corals to expel zooxanthellae, a symbiotic algae responsible that helps process food for the coral and gives the coral its color.

Corals affected by mild warm-weather bleaching can recover. Serious and extended bleaching may leave the corals susceptible to disease and death.

“Some of these 100-year-old corals died within a week,” Johnson said. “It was alarming that it was moving so quickly.”

State and federal agencies were waiting for this week’s winds to drop so they could resume surveys to assess the extent the damage.

“The disease event has a high infection rate — some sites in Broward County were reported as having as high as 80 percent of corals infected,” a Nature Conservancy report says.

Much about coral disease remains a mystery. State scientists are trying to identify the pathogen in the recent outbreak.

The bleaching event of 2014 may have distressed the mainland corals to the point where they became susceptible to disease. “It could have been a factor,” Johnson said.