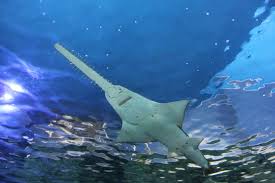 Sawfish are the world’s most threatened marine fish, with all five species classified as endangered or critically endangered. Florida used to host two of the species, but now only the Smalltooth Sawfish remains. The last largetooth sawfish was reported in Florida in 1943, according to Tonya Wiley, president of the Havenworth Coastal Conservation based in … Read more