The recreational harvest Snook season closes Dec. 1 in Gulf state and federal waters, including Monroe County and Everglades National Park, and will remain closed through Feb. 28, reopening to harvest March 1. Anglers may continue to catch and release snook during the closed season. 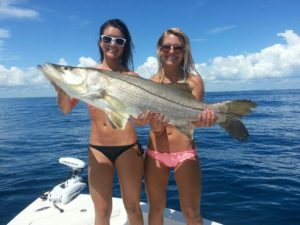 This and other regular Snook season closures are designed to help conserve the species during vulnerable times such as cold weather. Atlantic state and federal waters, including Lake Okeechobee and the Kissimmee River, will close Dec. 15 this year through Jan. 31 next year, reopening to harvest Feb. 1.

How to Catch and Release during closed Snook Season.

After being caught and released by an angler, fish may die for a variety of reasons. The most common causes of death are the physiological stresses caused by the struggle during capture and injuries caused by the hook or the angler. Some fish may die even though they appear unharmed and despite efforts at revival. Fish that struggle intensely for a long time during capture are usually exhausted and stressed from the accumulation of excessive amounts of lactic acid in their muscles and blood. Severe exhaustion causes physiological imbalance, muscle failure, or death. Therefore, use the proper weight-class tackle; land your catch quickly, and when possible, leave the fish in the water while you release it. Any exhausted animal needs oxygen to recover!

Hook wounds may appear minor to anglers, but damage to the gills, eyes, or internal organs can be fatal. If the fish is hooked deep in the throat or gut, research shows that it is best to cut the leader at the hook and leave the hook in the fish. Prolonged attempts to remove the hook often do more harm than good. In the Fish and Wildlife Research Institute’s (FWRI)* study of release mortality in snook, 24 snook were deep hooked. We removed the hooks from 12 snook, and we left the hook intact and cut the leader in the other 12 snook. We found that four of the 12 deep-hooked snook died after the hooks were removed. None died when we simply cut the leader and left the hook alone. Fish are capable of rejecting, expelling, or encapsulating hooks. Encapsulation is a process whereby the fishes’ healing process causes the hook to be covered with an inert matrix of calcified material; or a-cellular tissue. Steel and bronze hooks are less toxic and are rejected or “dissolved” sooner than are stainless steel and cadmium-plated or nickel-plated hooks.

Two types of hooks, barbless and circle hooks, are known to reduce injury and mortality of released fishes. Barbless hooks reduce tissue damage and handling stress because they can be removed quickly and easily. Barbless hooks are popular in the freshwater trout fisheries and are becoming increasingly popular with saltwater anglers. A Florida study conducted on snappers and groupers demonstrated that catch rates are the same for barbed and barbless hooks. If barbless hooks are not available, simply use pliers to crimp or remove the barbs from regular hooks. A caveat is called for when using these types of hooks: after having hooked your quarry, don’t give the fish any slack, because it will be more likely to escape from barbless hooks than from regular hooks.

The use of circle hooks has been researched and compared to regular hooks-often called “J” hooks-in several fisheries. In all of them except in the flatfish, or flounder, fishery, circle hooks were shown to result in significantly lower hooking mortality and higher catch rates. In one study, tunas and billfishes were hooked in the jaw 90% of the time. Circle hooks reduced deep hooking fourfold in the striped bass fishery while “J” hooks were 21 times more likely to cause a bleeding injury. Circle hooks are a bit more tedious to use, especially with live bait, but the advantages should compel anglers to give them an honest trial. Overall, research shows that circle hooks improve catch rates and reduce hooking mortality which results in positive impacts on exploited fish stocks.

Studies on snook have shown that live bait was used in most cases of hook-related mortality and that “gut hooking” was the primary cause of death. Artificial lures are generally in motion, so the fish takes the bait and the hook is set before the lure can be swallowed. To avoid internal damage from gut hooking, when you use live or dead bait try to set the hook immediately; with natural bait, there is less motion-the fishes’ immediate reaction is to swallow the bait. If you allow the fish to run with the bait, the chances of gut hooking the fish increase.

Survival rates for some Florida fishes
Controlled studies have shown that most fish released after hook-and-line capture, survive. Researchers working in Boca Grande Pass tagged 27 tarpon with sonic transmitters and found that 26 of these hook-and-line-caught fish survived. The one fish that died had been lifted from the water for a prerelease photograph. Scientists repeatedly caught bonefish held in a large pond in the Florida Keys and found that 96% survived capture. A few of the bonefish that ultimately died had been caught five to ten times each, which suggests that bonefish hooked and released in the wild probably have an even higher survival rate. Angler-caught snook held in large net-pens throughout Florida had a 98% survival rate. Most of the snook that died were caught with live bait, consistent with studies showing that fish caught with lures generally survive. Spotted seatrout caught in Tampa Bay had a 95% survival rate. Hook position affected survival rates; trout hooked in the gills or gut had lower survival rates than those hooked in the mouth. Redfish survival rates range from 84% in Georgia waters to 96% in Texas waters. Like seatrout, hook position affected survival rates; more than 50% of the throat or gut hooked fish died. These studies demonstrate that catch-and-release-fishing works-most fish that are released survive. By following a few simple guidelines, anglers can maximize survival rates.