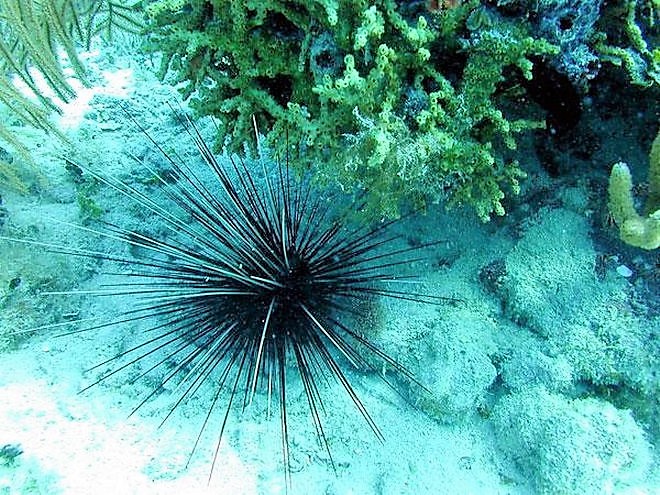 This week, the National Oceanic and Atmospheric Administration unveiled a $97 million rescue effort expected to take five to seven years. Part of the plan will include an unprecedented lab-breeding program to help revive long-spined sea urchins, a shimmering black-spined urchin and one of the largest on the planet.

The move was made possible after University of Florida researchers at The Florida Aquarium succeeded in producing lab-bred urchins for the first time in large numbers this summer.

Florida’s reefs were once crawling with the spindly black urchins, scouring reefs and devouring the thick, weedy algae. That prevented the algae from growing too thick and blocking the light coral need to co-exist with the tiny single-celled algae that live in their tissue.

But in the 1980s, a mysterious disease spread across the Caribbean, wiping out 97 percent of the sea urchins, Pilnick said. Scientists still aren’t quite sure what triggered the disease, but the results were dramatic.

This past June, the Tampa-based Florida Aquarium lab, run by UF fisheries researcher Joshua Patterson, succeeded at breeding 100 – enough that once replicated could begin the arduous work of restocking the reefs. The next phase of the work will focus on how to deliver the baby urchins to the reefs – determining the optimal age and timing – so that they can produce the millions needed, Pilnick said.

“Absolutely, it’s possible to do that. When we’re in the lab, when we’re growing these from gametes, we can collect a couple million eggs at a time,” he said. “As we get better at this and as we continue to do the research and development, we’ll be able to improve upon that 100.”

By Kevin Wadlow New artificial reefs may yet find a place in Florida Keys National Marine Sanctuary waters, says the chairman of a new sanctuary working group. “I think there is a real appetite out there for properly done artificial reefs,” said Joe Weatherby, a dive captain who spearheaded the sinking of the 524-foot…

Five species of endangered sea turtles are found throughout the marine waters of the Florida Keys, including the hawksbill, green turtle, Kemp’s Ridley, loggerhead, and leatherback.   Loggerhead turtles are the most abundant of all the marine turtle species in U.S. waters. But persistent population declines due to pollution, shrimp trawling, and development in their…

An essay contest is underway to award an underwater wedding to mark the 50th anniversary of the iconic “Christ of the Deep” statue’s installation in the Florida Keys National Marine Sanctuary. The 9-foot bronze “Christ of the Deep” has become a symbol for Key Largo’s John Pennekamp Coral Reef State Park, America’s first underwater preserve…