Sea turtles are one of the most endangered species in the world. They are mostly found in Florida, which is why many people refer to them as “Florida turtles.” Sea Turtle Nesting is an important time on Florida Keys Beaches.

The Florida Keys is home to sea turtles and is a nesting ground for them. The islands of Islamorada, Marathon, Big Pine Key and Key West have beaches that are popular with sea turtle mothers because they provide safety from predators and good places for laying eggs.

Sea turtle nesting season is from March to October, but the main nesting season is from May to August. The mature nesting female hauls herself onto the beach, nearly always at night, and finds suitable sand in which to create a nest. Using her hind flippers, she digs a circular hole 16 to 20 inches (40 to 50 centimeters) deep. After the hole is dug, the female then starts filling the nest with her clutch of soft-shelled eggs.

Depending on the species, a typical clutch may contain 50–350 eggs. After laying, she re-fills the nest with sand, re-sculpting and smoothing the surface, and then camouflaging the nest with vegetation until it is relatively undetectable visually. She may also dig decoy nests. The whole process takes 30 to 60 minutes. She then returns to the ocean, leaving the eggs untended. The most important thing we can do is protect the beaches that sea turtles use for nesting.

If everything goes just right, baby turtles prepare to emerge from the nests between 45 and 70 days later and begin their march to the sea.

When to time your visit

To maximize your chances of seeing baby sea turtles, time your visit between June and November when loggerhead turtle eggs hatch. Loggerheads are by far the most common of Florida’s sea turtles, with nests spread across the beach over 120 miles.

If you want to observe Sea Turtles nesting there are public sea turtle walks approved by the Florida Fish and Wildlife Imperiled Species Management Section. Held between May and July, the walks feature guides trained to help you watch the animals without disturbing them. Only trained, permitted volunteers may handle sea turtles, though anyone can observe from a respectful distance. Unauthorized contact can result in a $500,000 fine and even jail time. 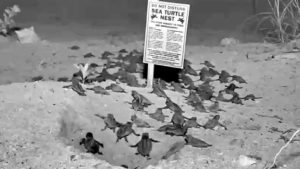 Light pollution from beach development is a threat to baby sea turtles; the glow from city light sources can cause them to head inland instead of the ocean. There has been some movement to protect these areas. On the east coast of Florida, parts of the beach known to harbor sea turtle nests are protected by fences. Conservationists have monitored hatchings, relocating lost baby sea turtles to the beach.

Hatchlings find their way to the ocean by crawling towards the brightest horizon and can become disoriented along the coastline. Lighting restrictions can prevent lights from shining on the beach and confusing hatchlings. Sea turtle-safe lighting uses red or amber LED light, invisible to sea turtles, in place of white light.

Stash the trash! Obstacles on the beach can prevent sea turtles from nesting as they crawl from the water across the sand, to lay their eggs. Trash and other obstacles can also prevent sea turtle hatchlings from reaching the water once they emerge from their nests. Food scraps attract predators such as raccoons and crows that can prey on sea turtle hatchlings, shorebird eggs and chicks. Litter on beaches can entangle sea turtles, birds and other wildlife.

Beachgoers can help native wildlife by properly disposing of all trash, filling in human-made holes in the sand and removing boats, beach toys and furniture from the beach before sunset. Fishing line can be deadly to sea turtles, waterbirds and other wildlife, so be sure to dispose of it properly. To find a monofilament recycling station near you, visit mrrp.MyFWC.com.