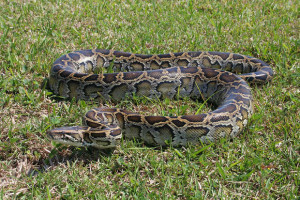 Python Challenge hunters planning to prowl the pinelands, mangroves and sloughs of Everglades National Park this winter should think again. Any pythons rounded up inside the national park’s boundaries must be taken alive by a specially authorized “python removal agent,” a National Park Service regional director said in a Sept. 25 letter.

Apparently that applies to a very small handful of the 1,600 or so people expected to sign up for the 2016 Python Challenge, organized by the Florida Fish and Wildlife Conservation Commission. Soon after the 2016 python hunt was announced last August, the Public Employees for Environmental Responsibility group protested the park’s “announced plan to allow hunters to scour the park for pythons,” calling it “misguided and likely illegal.”

That was never the intent, said NPS Regional Director Stan Austin in the letter to the employees’ group.  Austin contended an Aug. 18 story in the Miami Herald and other South Florida news accounts “may have contributed to a misunderstanding of the Park’s planned participation the Challenge.”

The Sun-Sentinel newspaper quoted Everglades Superintendent Pedro Ramos, “We look forward to expanding access into the park and to providing more opportunities for members of the public to become approved authorized python agents.”

Wildlife in Everglades National Park is widely perceived to have been decimated in recent years, likely due to the spread of fast-breeding Burmese pythons. The big snakes thrive in South Florida, where they have few natural predators. They feed mammals, primarily.

“First and foremost, hunting is not authorized in the park,” Austin wrote. “The public is prohibited from killing animals and removing them from the park, and no congressional authorization for hunting has been provided.”

Officials with the Washington, D.C.,-based PEER said they feared that allowing public python hunts inside the Everglades could lead to demands for other hunting efforts to remove invasive species elsewhere.

Currently, fewer than three dozen people reportedly have qualified as authorized python-removal agents in Everglades National Park. Park spokeswoman Linda Friar said Tuesday that park staff is “continuing to review the authorized-agent program” and may develop new standards by year’s end. “We have made no decisions and are still developing the protocols,” she said.

Currently, the park’s authorized python-removal agents must register as a park volunteer, pass a criminal background test and “demonstrate experience in safely capturing and handling large constrictor snakes.”  People signing up for the Python Challenge must pay $25 and watch a 30-minute online video.

In the only other Python Challenge, about 1,500 people combed state lands and found only 68 pythons. State planners declared the event a success in raising public awareness of the python infestation.

Areas outside Everglades National Park, including the Big Cypress Wildlife Preserve, would be open to python chasers.