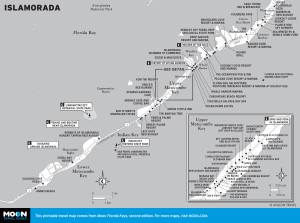 Islamorada’s kinda got it going on.

Somehow, without much fanfare, it has reached a tipping point where, because of a batch of new eateries and resorts, it feels like the “cool” key.

That wasn’t always the case. In the past, the Florida town’s venues had tired nautical themes and shells galore. Now you’ll find local beer brewers, a global eatery with a whiskey bar, an olive-oil shop and serious sea-to-table cuisine.

The property that arguably started the uptick in Islamorada’s hipness is Casa Morada (305-664-0044; casamorada.com). Midcentury modern simplicity meets oversized palm fronds at the 16-room micro-resort, renovated in 2003. Outdoor showers lead out to a Raymond Jungles-designed garden, which in turn leads to a bayside bar where sunsets will crush your cynicism. It’s pet-friendly, yoga-friendly, cellphone-discouraging, and there are no kids under 16. Don’t leave without borrowing the free snorkeling gear to hang with the lobsters and snappers along the sea wall.

Amara was once a Hampton Inn with a big Outback Steakhouse. Now it’s an airy, boho-beachy 110-room hotel with interiors by Edge of Architecture of Coral Gables. The place strikes a nice balance between elevating its environs and keeping things accessible — families loaf at the pool while hip travelers veg out with views of the grass flats.

And the property is large enough to support a sophisticated restaurant, Oltremare Ristorante, which plates contemporary Italian fare.

Pelican Cove, once an uninspired white-tile kind of place, offers 66 rooms in a modernist rustic mood via sandy wood, pops of color and surprisingly cool walk-in showers done in subway tile. It would be pretty easy just to chillax here.

It’s hard to keep culinary talent in a small town, and Islamorada is certainly a small town, but chef Michael Ledwith chose to buck the trend. He opened Chef Michael’s (305-664-0640;foodtotalkabout.com) three years ago, borrowing farm-to-table methods and applying them to the sea. His relationships with local captains bring left-of-center species such as tilefish, tripletail, snowy grouper, mystic grouper, hogfish and even lionfish to the table.

Though not new, the plantation-style Pierre’s (305-664-3225 moradabay.com/pierres/), recently procured a new chef, Ishmael Toro, formerly of Miami’s Novecento, who’s bringing stuff such as mofongo lobster to the menu.

Just down US-1, Oo-Tray (305-922-2027  oo-tray.com) aspires to “global cuisine with a local farm-to-table flavor.” Chef David Matlock, an alum of Thomas Keller’s Bouchon in Yountville, Calif., whips up outside-the-box items such as duck wings with bourbon and caramel and a bone-in pork entree with bacon jam and pineapple chimichurri.

Hailing from Key West, Bad Boy Burrito (305-440-3951) is hidden in the Village Square, a shady alcove behind the Trading Post. It offers delicious Cal-Mex-style grub with a Floribbean twist. Try the Key West pink shrimp taco with charred pineapple habanero sauce, or the Baja fish tacos.

Just up the street, find Olive Morada (305-735-4375 olivemorada.com), an olive-oil and gourmet emporium that opened in December. It has 42 oils and balsamic vinegars, including the Jimmy Buffett special — Persian lime olive oil mixed with coconut white balsamic vinegar.

Next door, the Islamorada Beer Co. (305-440-2162 islamoradabeerco.com), which brews upstate and opened its doors in October, offers flights of brews such as Sandbar Sunday American Wheat Ale.

For a microbrewery that brews on-site, hit Florida Keys Brewing Co. (305-916-5206  floridakeysbrewingco.com), situated off the strip in a row of funky warehouses. Though it opened five months ago, the tasting room already feels homey, and the brews are gaining local love. Try the Honey Bottomed Blonde.

Of course, if you just have to get your fix of “old” Islamorada, then belly up to the bar during sunset at Lorelei Restaurant & Cabana Bar (305-664-2692  loreleicabanabar.com), watch the fishing charters pull in, and see why this hamlet is known as a “quaint little drinking town with a fishing problem.”

Source: Once an ugly duckling, Islamorada in Florida Keys has become cool | The Columbus Dispatch

When people think about a kids-focused, family Florida vacation, Disney is the destination that typically comes to mind first––and for good reason. But the fact is, the Kid Friendly Florida Keys provides unique, exciting and educational experiences that make the islands a dream getaway for kids of all ages. Here are two can’t-miss activities in…

By Josh Gore Free Press Staff The village moved one step closer last week to finalizing a plan it says would improve Indian Key and Tea Table fills. In the dozens of comments made to the village at the meeting or submitted beforehand, no one favored limiting public use of the right-of-way or cutting…

THE FLORIDA KEYS ALONG THE OVERSEAS HIGHWAY — Harry Appel and Jen DeMaria live in a secluded beachside retreat in the Lower Florida Keys. On a recent afternoon, an endangered Key deer drops by as they sip iced tea in their backyard. The deer poses for a photo, then scampers away. For years, New Jersey…

I’m in a kayak, alone and three months pregnant, paddling through jade water, trying to reach an unnamed island off the shore of Big Pine Key, Florida. The mangroves that have waded offshore—tangles of long grey legs topped with a mess of bright green leaves—point me towards a strip of beige sand. A smattering of…