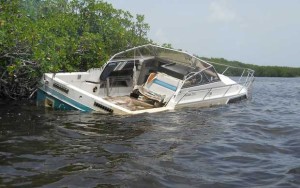 “Obviously it’s an issue here,” Raschein said at a Thursday workshop conducted by the state Fish and Wildlife Conservation Commission at the Murray E. Nelson Government and Cultural Center in Key Largo.

Removing derelict vessels “costs a lot of money,” she said, “and they’re a pain.”

FWC officers and staff outlined eight concepts being considered as the basis for a Florida Legislature bill to prevent some poorly maintained boats from sinking at anchor.

The rules could include stricter requirements to repair at-risk boats deemed likely to sink and requiring boats to be able to navigate on their own under power or sail.

Certain large boats — commercial boats more than 65 feet long or older boats made of wood or steel — could be required to post a bond at registration, since those type of vessels are very expensive to remove after a sinking.

“Some boats cost more than others to remove,” FWC attorney Emily Norton said. “The big ones cost a lot more.”

Program administrator Phil Horning noted boats in that description represent 3 to 5 percent of vessels removed with state money but “represent 50 percent of the removal costs.”

In 2009, the abandoned 84-foot gambling boat Pair-O-Dice was removed from a grounding off Key West, where it created a navigation hazard near a busy channel for months, state officials said. It was removed at a state cost approaching $125,000.

The derelict shrimp boat Santa Lucia caused a half-mile of seagrass scarring near the Keys in addition to costing $59,000 in state funds to remove, Horning said. A photo of the capsized shrimper opened the presentation to a crowd of about 50 people.

Many of the concepts would apply only to anchored boats, not those tied to a private dock or marina.

Rules that could force longtime liveaboards off the water concerned several speakers at the Key Largo meeting.

“Thousands of people down here cannot afford normal accommodations,” said Jon Strydom, a charter captain. “This is a really expensive area to live in, and we  need these people down here. It’s already hard enough for them.”

“We don’t want to make anybody homeless,” FWC Capt. David Dipre said, but he noted that some vessels used as liveaboards are “half submerged and filled with cockroaches.”

“It might be a place to live but its not a great place to be,” Dipre said.

Vessels “are supposed to be operational so when [the next] Hurricane Wilma comes along, you can do something about it and take control of your own boat,” he said.

Henry Feddern and Anne Baxter said the state should consider some long-established sunken boats as part of the marine environment since they provide shelter. They pointed to the recent removals of a sunken barge off Rodriguez Key near Key Largo and a heavily damaged houseboat off the Upper Matecumbe Key bayside as examples.

Results of resident surveys taken at a series of meetings will be used to craft legislative proposals.