Changes could be coming to one of the Florida Keys’ most popular fisheries – Mutton Snapper. 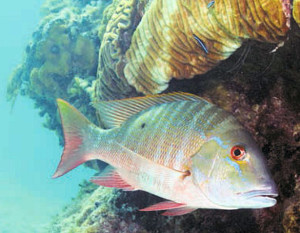 State wildlife officials wanted to hear from fishermen over possible changes to bag limits and fishing areas for mutton snapper such as Western Dry Rocks. Some state and federal fishery managers have proposed lowering the bag limit for one of the Florida Keys’ most highly targeted species of fish.

Staff have also proposed further reducing the recreational bag limit to two fish per angler and establishing a vessel limit of 12 fish during the spawning season — May through July.  In addition, there’s expected to be a discussion about restricting access or closing the Western Dry Rocks, a very popular mutton snapper fishing spot — both commercially and recreationally — for Lower Keys anglers during the spawning season.

“That is a big spawning area and so they (FWC officials) wanted us to bring that discussion to the workshops,” Nalley said. “Do we need to look at a seasonal closure or limiting access? Those are some of the questions that will be discussed.” She added that none of the proposed changes have yet to be codified. That could happen at the April 16 commission meeting, or be continued for another commission meeting later in the year.

For more than four years, representatives with the FWC, South Atlantic and Gulf councils have met regularly to discuss new rules for such species as mutton snapper, yellowtail snapper and black grouper. A stock assessment last year found that the mutton stock is not undergoing overfishing. However, the overall biomass is down and that requires the federal quota to be lowered, FWC fisheries biologist Jessica McCawley reported last year.

Much of the concern about the reduction in biomass and the potential for overfishing stems from the large number of anglers targeting muttons when they spawn during full moon nights in May and June on Keys and Florida reefs, FWC staff reported. Longtime commercial spear-fisherman Don DeMaria has long supported reasonable changes that would help the fishery, including curbing fishing where targeted species spawn.

“Catching fish when and where they aggregate to spawn is not a good idea,” DeMaria said. “It seems that everyone else throughout the Caribbean and Pacific understands this basic principle of fisheries management, except us. When other countries identify a major spawning aggregation site — they enact protective measures. We are still trying to identify spawning sites and even when we do clearly identify one, we argue relentlessly over the need to protect it, and this is supposed to be a National Marine Sanctuary?”

Restricting or closing Western Dry Rocks during the spawn shouldn’t be viewed as a negative, he added.

“Fishermen should not look at spawning area protections as something taken away from them,” DeMaria said. “If properly placed, spawning area protections, along with the gear restrictions already in place in the South Atlantic for snapper and grouper (fish traps, bottom long lines, nets) it should be possible to allow year round fishing, outside the reserves, with reasonable size and bag limits.”