The commercial harvest of the Florida Keys’ most lucrative sea creature Florida Lobster was up this year, but the price fishermen were paid was way down, they said. The recreational and commercial harvest of spiny lobster will close at midnight Thursday, March 31. The commercial harvest is expected to be about 5.9 million pounds, up about 500,000 pounds from last season, according to Florida Fish and Wildlife Conservation Commission fisheries biologist Tom Matthews. However, the price dropped significantly, with fishermen being paid as little as $13 to $14 a pound, compared to a maximum of $22 a pound last year, fishermen said. A robust Asian market has had spiny lobster prices skyrocketing in recent years. 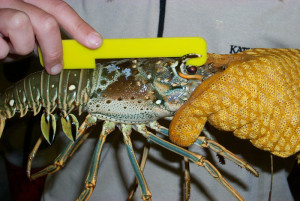 About 90 percent of all commercially harvested Florida lobster wind up in Asia, fishermen have said. However, a troubled Chinese economy appeared to contribute to the dip in the Asian spiny lobster market. “The Chinese economy played a role, but also they are learning how to play the [lobster] game,” Stock Island-based commercial lobster fisherman George Niles said. “Their stock market was tanking when we were doing well.” Fishermen also speculated that the Chinese buyers have begun to work more closely with American fish house owners to control prices. The commercial spiny lobster fishery is a roughly $70 million industry in the Keys. In the past eight years, fishermen have begun to install a series of expensive live wells on their boats so they can keep their catch alive. Asian buyers tend to mainly buy only live, healthy lobsters.

The decrease in price has led to a greater need for law enforcement to ramp up its efforts in catching and successfully prosecuting poachers, fishermen said. The Florida Legislature passed a bill this past session that would make putting out Florida Lobster traps without certificates a third-degree felony, which carries a maximum five-year prison sentence. Instead of robbing traps, unscrupulous fishermen are putting out more traps than they are legally allowed to. The legislation is awaiting the governor’s signature.