The Miami Blue Butterfly population once flourished, spanning along the eastern and western seaboards of mainland South Florida as well as throughout the Florida Keys, in the 1970s. The following decade, though, due mainly to heavy coastal development that destroyed its host habitat, the species plummeted. After that time, it was only known to exist in a few spots in the Keys such as Bahia Honda State Park and on islands within the Key West National Wildlife Refuge. The former is no longer known grounds for the butterfly while the latter has just two islands with known populations of the tiny insect. 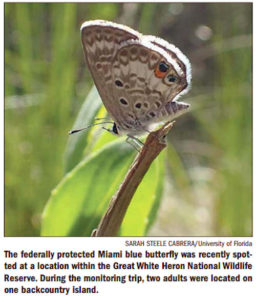 But recently, in April, two adult Miami blues were found at a new location within the Great White Heron National Wildlife Refuge in the Lower Keys — roughly 24 miles from the two other existing spots. Biologist Kate Watts, out of Big Pine Key’s National Key Deer Refuge, was accompanied by butterfly experts from the University of Florida and North Carolina State University when the discovery was made. “It’s likely they have been at Great Heron for years,” Watts told the Free Press. “I believe it’s just a low-density population that went undetected until now.”

The butterfly uses two coastal plant species to lay its eggs, blackbead and gray nickerbean. Each can be found in abundance on many of these untouched islands within both refuges. Watts said these plants are ideal because the butterfly in its caterpillar stage feeds on new growth found on the branch ends. As for specific numbers of the sparse federally protected Miami blue population, it’s unknown. “There is no real estimate,” Watts said. “Because they have so many different stages it makes it hard [to keep a count].”

The Center for Biological Diversity, a non-profit advocacy group, classifies the Miami Blue Butterfly as one of the rarest insects in North America. The tiny insect helps pollinate plant life along coastal berms, where an abundance of foliage helps ward off beach erosion. Federal officials formally listed the butterfly as endangered in 2012. According to Watts, biologists usually see one to three of the adult butterflies at each survey point during their outings every few months. They then try to compare these numbers across months and years of data. Adult Miami blues have a lifespan between one and two weeks and typically stay within 30 feet of their birthplace. During that time, according to Watts, females will lay between 20 and 100 eggs a day on host plants. Aside from searching for new “communities,” the team is investigating questions related to known populations as well. “We are also trying to figure out what these butterflies are doing when there isn’t new growth [on host plants] for the caterpillars to feed on,” Watts said.

One possibility, according to her and the rest of the team, is that ant colonies are storing the butterfly eggs and tending to them until better conditions arise for them to hatch and become caterpillars. In exchange, the ants receive a sweet sugar substance from the caterpillar cocoon without harming it. This symbiotic relationship is fairly common between ants and other insects as well. Watts and the UF and NC State butterfly experts said the search is definitely not over for more butterfly communities. They suspect that more Miami blues are around other islands in the area as well. “It’s likely we’re not detecting everything out there,” Watts said. In a few months, Watts and the rest of the team will return to the Great White Heron National Wildlife Refuge to continue the search. That two-month break is chosen because it typically takes that length of time after good rainfall for new adults to start flying. “The species is driven by rainfall,” Watts said.