The Mangrove is a shrub or small tree that grows in coastal saline or brackish water. The term is also used for tropical coastal vegetation consisting of such species. Mangroves occur worldwide in the tropics and subtropics, mainly between latitudes 25° N and 25° S. Mangrove are salt-tolerant trees, also called halophytes, and are adapted to live in harsh coastal conditions. They contain a complex salt filtration system and complex root system to cope with salt water immersion and wave action. They are adapted to the low oxygen (anoxic) conditions of waterlogged mud. 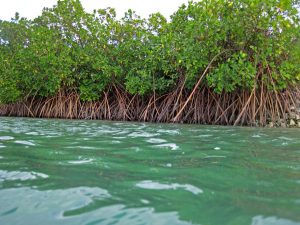 Growing along the edge of the shoreline where conditions are harshest, the red mangrove (Rhizophora mangle) is easily distinguished from other species by tangled, reddish prop roots. These prop roots originate from the trunk with roots growing downward from the branches. Extending three feet (1 m) or more above the surface of the soil, prop roots increase stability of the tree as well as oxygen supply to underground roots.

Under optimal conditions, this mangrove tree can grow to heights of over 80 feet (25 m), however, in Florida, red mangroves typically average 20 feet (6 m) in height. Habitat range in Florida is limited by temperature. Red mangroves occur from Cedar Key in the Gulf of Mexico and Daytona Beach in the Atlantic, southward through the Florida Keys. The smooth-edged, elliptical leaves have shiny, dark green uppersides and pale green undersides and occur opposite from each other along the branches. Trunks and limbs are covered with gray bark, over a dark red wood from which the common name originates. Clusters of white to pale yellow flowers bloom during the spring and early summer months.

Reproductive adaptations enable seedlings to germinate while still attached to the parent tree. Seeds sprout into 6 inch (15 cm), pencil-shaped propagules. Seed germination while still attached to the tree gives this mangrove a higher chance of survival. When the seedling falls into the water, it may either take root alongside its parent or be carried by the tides and currents to other suitable habitat. 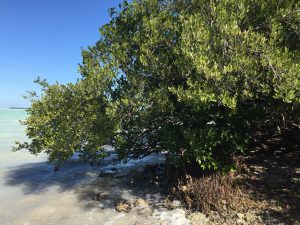 Avicennia germinans, the black mangrove, is characterized by long horizontal roots and root-like projections known as pneumatophores. It grows at elevations slightly higher than the red mangrove where tidal change exposes the roots to air. The pencil-shaped pneumatophores originate from underground horizontal roots projecting from the soil around the tree’s trunk, providing oxygen to the underground and underwater root systems.

The black mangrove reaches heights of over 65 feet (20 m) in some locations, however in Florida they are smaller with heights to 50 feet (15 m). Within Florida, they range from the Keys north to Cedar Key on the west coast and St. Augustine on the east coast. Leaves occur opposite of each other along the branches, with upper sides that are shiny and undersides densely covered with hairs. The bark of this mangrove is dark and scaly. Black mangroves blossom in spring and early summer, producing white flowers. 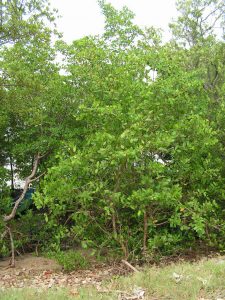 Occupying higher land than the red and black mangroves, the white mangrove (Laguncularia racemosa) has no visible aerial roots, unlike the black mangrove which has pneumatophores and the red mangrove with prop roots. However, when it is found in oxygen-depleted sediments or flooded for extended periods of time, it often develops peg roots.

White mangroves are the least cold-tolerant of the three mangrove species found in Florida, occurring from Levy County and Volusia County southward in Florida. This small tree or shrub grows rapidly in rich soils to heights of 50 feet (15 m). The light yellow-green leaves are broad and flat with two glands located at the base of the leaf where the stem originates. These glands are sugar glands called nectaries. White mangroves produce greenish-white flowers in spikes, blooming from spring to early summer. 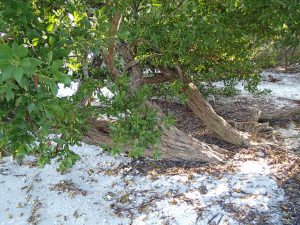 Often found in the upland transitional zone, the buttonwood (Conocarpus erectus) is often associated with mangrove communities. Sensitivity to frost restricts its range to south Florida. The name buttonwood comes from the button-like appearance of the dense flower heads that grow in branched clusters, forming cone-like fruit. This plant does not reproduce via propagules, but instead producing seed cases. While the three mangrove species have leaves that occur opposite of each other, the buttonwood leaves alternate. The leaves are leathery with pointed tips and smooth edges. There are two salt-excreting glands located at the base of each leaf. Flowers appear in cone-like heads and are greenish in color.