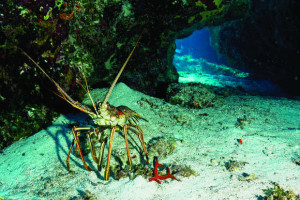 Three [Lobster Mobsters] fishermen convicted of robbing lobster traps and possession of undersized lobsters in June stemming from their September 2011 arrest were banned from commercial lobster fishing for life and two of them were given prison time.

The captain of the Marathon-based commercial lobster fishing vessel Classy Lady, Nelson Rojas, was convicted of trap molesting, tampering, possession of undersized lobster and interference with a conservation officer, according to court records. Two crewmen, Raudel Rubio and Maikel Martinez-Alvarez, were convicted of trap molesting and possession of undersized lobster.

All must also pay $1,927 for costs of the investigation, records state. They must also surrender all commercial and recreational fishing licenses to the Florida Fish and Wildlife Conservation Commission. None of the men will be allowed on Monroe County waters while on probation.

FWC officers caught the men at the start of Labor Day weekend in 2011 on the bay side of the Seven Mile Bridge, according to FWC reports.

The regular eight month lobster season is from Aug. 6 to March 31. Legally taken lobsters are required to have a carapace of three inches or greater. [Don’t become Lobster Mobsters]