No live-aboards should be allowed to dock at the future redeveloped Rowell’s Waterfront Park, but a splash pad for children would be widely welcomed. Those were two main takeaways from a county-hosted public input meeting held last week.

Neighboring residents asked Monroe County officials to implement the same ban on live-aboards accessing the park that was recently adopted at the Murray E. Nelson Government and Cultural Center at mile marker 102.1, bayside.

Residents said they feared that live-aboards could move from Tarpon Basin behind the government center and drop anchor off the park, particularly after restrooms and other facilities are developed there.

He said he’ll look for ways for the park to best serve the broader public interest based in part on comments from the meeting. 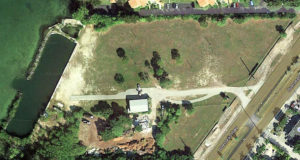 “I’ve heard [calls for] intense landscape buffers and a perimeter walking path that may wrap around, and the swimming area that Tamarind Bay residents are concerned about,” he said of the current kayak launch/swimming area adjacent to Tamarind Bay’s dock entrance.

“We talked about bringing in food trucks, rather than a permanent structures with a series of utility drops,” he added.

Residents asked mostly for a dog park, fitness zones, walking paths, playgrounds, shaded areas and a splash pad for tots. At previous meetings, residents have pushed back against county officials’ suggestion that families visit Jacobs Aquatic Center in lieu of a splash pad at Rowell’s, saying it is cost-prohibitive for young families to pay entry fees at the aquatic center next to Key Largo Community Park.

Gina Boilini, a young mother, asked for a splash pad and other kid-friendly features at Rowell’s.

Since last week’s meeting an online petition for a splash pad has netted more than 600 signatures.

Resident Gene Graham said he’d like to see the restrooms, being funded in part by the Florida Department of Transportation, be moved away from the park entrance near U.S. 1 so that they don’t attract day-trippers.

The $125,000 grant for the design of the restrooms was intended to tie the waterfront park into the Florida Keys Overseas Heritage Trail, though some residents fear the effect instead will be to create a de facto rest stop for travelers.

Sally Stribling agreed, asking if the bathrooms could be privately funded and maintained.

Graham said he feared the park could become like Harry Harris Park, which attracts a lot of mainlanders. Though, he did recommend Rowell’s borrow one pre-Hurricane Irma feature of the Tavernier park.

“Why can’t it have a security kiosk like Harry Harris?” he asked. “I don’t want it to be a transient park. I don’t want people coming from the mainland with a packed cooler, who come down for the day and leave their trash behind.”

Other residents called for an entrance fee to be collected from non-Monroe County residents.

D.J. Miller asked for ample signage and a deceleration lane into the entrance of the park for safety reasons.

Susan White asked officials how hurricane debris would be managed at the park in the future. The park has been used since Hurricane Irma as a storage and processing site for vegetation, white goods and marine-related debris, including sunken boats.

Wilson said any storm that creates as much debris as Hurricane Irma forces officials to look at any available space, including county parks, as temporary storage sites.

“If it were to happen again, we’d probably have to do it again,” he acknowledged. “It’s the ability to come back from a hurricane.”

The 8-acre passive park is to feature picnic tables, benches, a place to swim and a launch for kayaks, canoes and standup paddleboards. Boats and personal watercraft are not allowed. Admission is free. The park is open daily from 7:30 a.m. to sunset.

Comments and questions about Rowell’s Waterfront Park may be emailed to .