Several commercial and recreational changes to king mackerel management in Florida state and federal waters will take effect May 11. These changes are consistent with federal regulation changes that are effective the same day. 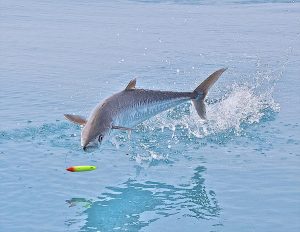 King mackerel are divided into two separate fisheries: the Atlantic fishery and the Gulf-Atlantic fishery. Bag limits vary by fishery, region and season.

In both the Atlantic and Gulf-Atlantic fisheries, the trip limit for the commercial harvest of king mackerel in state waters is reduced or closed in response to federal trip limit reductions and closures.

King mackerel must be at least 24 inches in fork length to be harvested and a saltwater products license, a restricted species endorsement and a federal king mackerel permit must be held to harvest king mackerel commercially. Colored areas in the vessel/trip limits chart correspond to colored area in the maps.

Related Post  Grouper Fishing Reopens May 1 in The Florida Keys

King mackerel are found in both nearshore and offshore waters throughout Florida, often near schools of baitfish. Like many of the pelagic species, kings prefer water temperatures above 68 degrees, so they migrate to warmer waters in the fall of the year. Kings feed primarily on schooling bait fish and squid and are commonly caught while trolling with flashy spoons or duster rigged with a whole cigar minnow. Free lining or slow trolling with live baits (cigar minnows, herring, sardines, blue runners) is a great way to hook the larger and more solitary kings. Free lining a live squid at night, especially over reefs that hold baitfish, can also be very effective. Tackle requirements depend on the size of fish and the method of fishing. Spinning or bait-casting tackle with 20 to 30 pound monofilament line is sufficient when free lining live baits as long as you have enough spool capacity for the initial run after hookup. While kingfish do not have great endurance, they are very fast and will commonly take 100 to 200 yards of line off the reel in the first 30 seconds of the fight. For trolling, 30 to 50 pound trolling tackle is commonly used. Kings have very sharp teeth requiring the use of wire or very heavy monofilament leader.