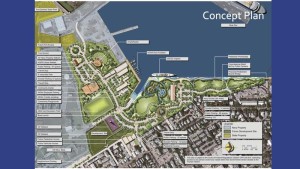 The city of Key West took ownership of the 32 acre Truman Waterfront on the island’s western shore back in 2002.

The property had been used by the Navy since World War II as a submarine base and for other kinds of training. But in a round of downsizing, the land was given to the city.

For the last decade, Key West has been drawing up plans and waiting on environmental clean-up of the property.

This week it is finally breaking ground of the first phase of the land’s new life: as a waterfront park.

The initial phase, at $17.4 million, is mostly about infrastructure. Eventual plans for the property call for a community center, amphitheater, ballfields, gardens and playgrounds.

The public is invited to the groundbreaking, set for 10 a.m. Wednesday just past the entrance on Southard Street.

Parents, kids, grandparents and extended families can explore [mostly Key West] Florida Keys attractions, tours, watersports and other offerings while participating in a value-added program that provides free admission and opportunities for children age 12 or younger. Beginning Tuesday, Sept. 7, and continuing through Friday, Oct. 15, the Kids Free Florida Keys program is spearheaded by…

Florida Keys Community College invites kids, tweens, and teens to take part in the FKCC’s Summer Camps.  Campers will have the opportunity to tap their creative talents, explore careers, expand their academic interests, develop technical skills, and make new friends.  Parents and guardians can trust FKCC to deliver a high-quality camp experience in a safe, comfortable, and…

Florida’s 171 state parks vary in the natural and cultural resources that they have to offer. Many of them have at least one unique feature, and some of these are easy to miss. Pennekamp Park. The Florida Keys are an island chain surrounded by saltwater. Finding freshwater has always been a concern. Freshwater holes were…

Effective April 1, 2021, regulation changes will go into effect at Western Dry Rocks that prohibit fishing from April 1 – July 31. These changes are aimed at providing benefits for multiple recreationally and commercially important species that aggregate to spawn at Western Dry Rocks, including permit, mutton snapper, gray snapper, and yellowtail snapper. The…