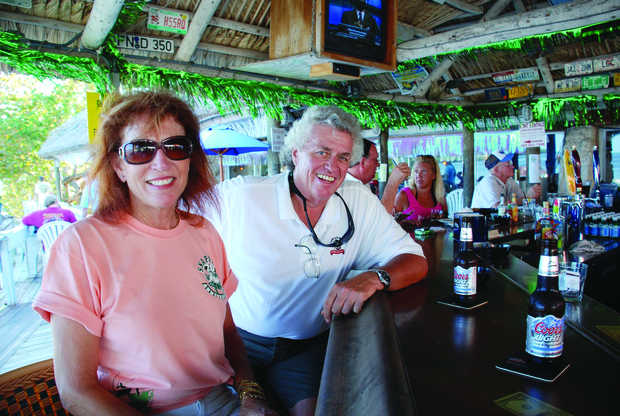 Key Largo’s Snapper’s Waterfront Restaurant in Key Largo sold for $7.1 million this week. The popular eating and drinking spot at mile marker 94.5 was owned by Howard and Lynda Kolbenheyer for the past 27 years. Why did they sell? “Because it’s been 27 years and I’m tired,” Howard Kolbenheyer said. He and Lynda are staying in the Keys and will be consulting during a transition period with the new owners.

A going away/getting-to-know-the-new-owners party is planned for Sunday at the Turtle Club outdoor bar in the back of the restaurant starting at 3 p.m. The sale was for the two-acre oceanfront lot and the business, said listing agent Monika Sundstrom with Palm Beach real estate agency Engels and Volkers. The package land, restaurant and 12-boatslip marina was listed for $7.5 million. The deal was financed locally through Centennial Bank.

The new owners are Robert and Peter Althuis, who together operate the real estate development firm Acero International. The company is based in Miami, but has regional offices in Austin, Texas and Bogota, Colombia. Robert Althuis, Acero founder and chief executive officer, said to expect very little change at Snapper’s because the Kolbenheyers developed a successful formula that has been popular with both locals and tourists for three decades. “Our first priority is not to screw it up,” Althuis said Wednesday. “Our mission is to continue the legend Howard and Lynda Kolbenheyer created.” That means no layoffs, the staff will stay the same, there will continue to be live music and “all the other fun stuff Howard and Lynda have done to make it a very special place,” Althuis said.

The Althuises see a lot of potential in the Keys, ironically because local, state and federal protections make growth difficult. “You can’t recreate it,” Althuis said. Investors are increasingly looking to build in the Keys, Althuis said, but regulations severely limit where development can occur.”It’s unique because you can’t build it up. In the next 10 to 20 years, the Keys are going to transfer into a world-class destination,” he said. “But you’re going to see the investment in improving existing homes, existing hotels and existing restaurants. That type of transfer is happening all over the Keys.” Althuis also sees the Keys becoming more popular in the wake of volatility abroad, like the Nov. 13 terrorist attacks in Paris. “There’s so much hostility and volatility around the world that a lot of people will opt to stay domestic,” Althuis said. “That’s a super net positive for the Keys.”