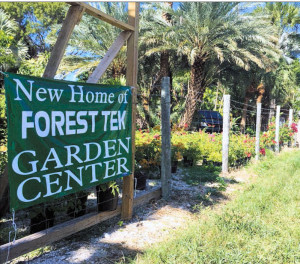 Gerry and Wendy Droney have been operating their landscaping and nursery business on Plantation Key since 1986. But now entering their retirement years, the couple sold their operation to the locally-run Forest Tek Lumber late last month. The buyer, which also has a hardware supply company on Big Pine Key, is run by Islamorada residents Allen Wood and Bruce McClenithan. “We have a small garden section that we’ve outgrown [in Islamorada],” Wood said of the purchase and the need for expansion at the mile marker 88.5, oceanside, lumber yard.

The mile marker 88.7, bayside, nursery, for the most part, will remain the same. However, Wood said some minor modifications and additions are planned. They will first look to add a power equipment section to the grounds, offering such gardening items as hedgers and trimmers. An addition of an organic produce market and juice bar is also being discussed. “That’s just one conversation [McClenithan and I] have had,” Wood said. “I think it’s a neat idea.” The nursery’s new layout, according to Wood, is still a couple of weeks out, though. As far as the staffing goes at the nursery, it will remain pretty much as it is. But Wood said they will probably look to add a few more employees in the near future. The name of the nursery, which was previously known as Gerry Droney Landscaping, is now called Forest Tek Garden Center. All the plants supplied to Forest Tek Lumber are grown off-site on the mainland and then transported down.

Wendy Droney, who had worked daily at the nursery for the past 29 years, was happy with the ownership transfer. “Of course, I’ll miss the nursery,” she said. “But the sale is a good thing. They are good people who still plan to keep it pretty much the same.” Still, Droney said she’ll feel a loss when it comes to the daily conversations she’s had with regular customers over the three decades in business. What the retired couple plans to do with all their newly-acquired free time, though, is uncertain. “It’s all still kind of new to us,” Wendy Droney said while laughing.

The sale of the nursery, according to the Monroe County Property Appraiser’s website, was for $750,000. In 1989, when a retail structure was first placed on the parcel, it was valued at a little over $52,000.

The view out across the Atlantic from Jerry Wilkinson’s house is the stuff of dreams. Between the mix of sky and ocean exists differing shades of blue for as far as the eye can see, while inside the house exists of bit of historical chaos. Walls are lined with books and old cameras, glass bottles and books…

FreeBee Islamorada is expanding the hours of its alternative transportation services with Freebee Islamorada, operating on-call electric vehicles to transport passengers among Islamorada’s four islands. The Freebee Electric Vehicle Ridesharing Service has been running on Upper Matecumbe Key since November 2018. Current service is offered Thursdays and Fridays from 4 p.m. to midnight, Saturdays from…

Environmental activist Marjory Stoneman Douglas famously wrote there are no other Everglades in the world. The same thing could be said about the Florida Keys, the setting for Netflix’s dark family drama Bloodline, the second season of which is now streaming on Netflix. Sitting on the beach beneath a blanket of stars at the Moorings…