Islamorada Charter Captains are hopeful. Offshore and flats charters “are a huge factor” in Islamorada’s tourism economy, said Judy Hull, executive director of the Islamorada Chamber of Commerce. “A large percentage of our tourists come here for the fishing,” she said. “That’s why we’re known as the Sportfishing Capital of the World.”

Nearly all the big offshore boats have returned to restore the waterfront scene at Islamorada’s Whale Harbor Channel, flanked by two iconic marinas.

“I’m hanging on and trying to stay on my feet,” Capt. Butch Green of the “Sassy Lady” charter boat said Jan. 25 at the recently reopened Postcard Inn and Marina. “I’m letting my customers know that we’re here and there’s fishing to be done.”

“I missed a lot of income” because of Hurricane Irma, said Green, a fishing professional in Islamorada since 1972. “But you’ve got to stay positive. I’ve seen over my years here that the Keys are usually the last place to feel a recession and the first to recover. People still want to come down.” 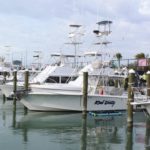 The offshore charter boats with their tuna towers reaching to the sky returned to the Postcard Inn in early November. About six charterboat berths of the two dozen spots were vacant last week but that won’t last.

“All slips at the marina at Postcard Inn have been rented,” resort spokeswoman Katie Kole said in an email.

Across the bridge near mile marker 84, the Whale Harbor Marina was able to make repairs and return to operation relatively soon after the September 2017 storm that battered the Islamorada oceanfront and closed several major resorts for months.

“We needed our marinas back,” Hull said.

“I think some folks are afraid that it’s still damaged down here,” said Capt. Don Reichert, doing weekday maintenance aboard his “Fishin’ Mission” boat at Whale Harbor Marina. “But Feb. 14 usually is the start of our busiest season, so we’ll see what happens.”

After Irma closed the Postcard Inn docks, many captains scrambled to find a place to tie up.

Green took the “Sassy Lady” as far as Lower Matecumbe Key to find a temporary spot at the Lobster Walk.

“They have a heck of a lot of nice people and made it easy for us to work there,” Leopold said. “I’ll always be grateful.”

But the docks at Postcard Inn (formerly Holiday Isle) are home, Leopold said.

“Everything is going well and [resort managers] have been very accommodating and fair,” he said. “I think it’s the nicest marina in the Keys. We had a pretty good January with some more tournaments coming up.”