The village moved one step closer last week to finalizing a plan it says would improve Indian Key and Tea Table fills.

In the dozens of comments made to the village at the meeting or submitted beforehand, no one favored limiting public use of the right-of-way or cutting off access to the water. The fills form a causeway between Upper and Lower Matecumbe keys and are frequented by locals and visitors as a boat launch and roadside fishing and picnic area. Residents, however, have complained in the past about people who camp or park there illegally and leave trash along the fills.

Public Works Director Lesli Wojtecki described last week’s meeting as a success given the 30-plus people in attendance. The workshop had no microphone or presentation. Instead, individuals spoke to local officials one on one or submitted statements to be forwarded to the Village Council.

Upper Matecumbe Key resident Cale Smith says he favors allowing daytrippers from the mainland to access the area. “Let’s not get into policing the kind of tents people can use down here,” he said. Picnickers commonly set up sun shades or tents during their visits. Smith said he would like to see more kayak and paddleboard launching sites.

Perry Scuderi, a local fishing captain, wants the village to enforce littering laws and monitor personal watercraft usage, which has increased in the past year. “Jet Skis really became a problem when they closed down the Jet Ski area off Card Sound [Road],” he said.

Last year, Monroe County Commissioner Sylvia Murphy asked the Monroe County Sheriff’s Office and Public Works to close off water access to paddlers and boaters along the Card Sound Road right-of-way. The area was a popular weekend gathering spot for daytrippers from the Homestead and Miami areas. Murphy said she was concerned about littering and public safety.

Miami resident Armando Brana has been vocal in the Keys during the past year on the matter of keeping water access open. In a letter to the village, Brana wrote that Miami residents don’t use the fills nearly as much as Monroe County residents and tourists. Brana said he estimates that South Florida residents use the fills 26 days a year, which includes summer weekends and holidays. “One thing that bothers me is people complaining about tents and camping,” he said. “I very seldom see any tents or any camping in that area.” Brana recommended that the village mimic what Miami-Dade County has done along Rickenbacker Causeway, which includes charging a small user fee to help cover the costs of keeping the area safe and clean.

The village has already supported moving forward on shoreline improvements, which could begin later this year. Upgrading the boat ramp is also moving forward. More signage to educate people about the environmental impact of fishing lines and littering is also in the works.

The village, though, is still mulling what to do to improve the parking situation. A designated parking area, with or without meters, has been discussed. The land is owned by the Florida Department of Transportation and a lease is currently in the process of being signed, which will give the village authority to manage the area. With a lease, the village also could possibly tap into Monroe County Tourist Development Council monies, which would pay for possible bathroom facilities.

Related Post  Upgrade Sought to the Hurricane Monument in Islamorada

The village will accept public comment at through Wednesday, March 4. The matter is expected to be discussed at a Village Council meeting later this month.

Publix will begin demolishing the 10 buildings that sit on its planned market site in Islamorada before the end of the month. Most notably, the buildings include the former Fish Bowl bowling alley, which closed in 2012, and the Coral Grill, a decaying Islamorada landmark that closed more than 15 years ago. Publix attorney Andy… 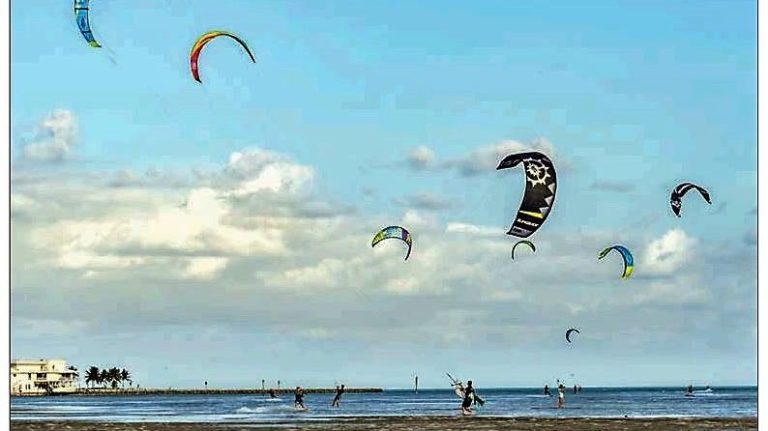 Have you been kiteboarding? This looks like a beautiful use of Anne’s Beach.

It was 80 years ago, on Sept. 2, 1935, the fiercest storm (even today) to hit North America, came ashore in Islamorada, wreaking death and destruction from Tavernier to Duck Key. The event marks a significant period in the life of the Upper Keys, a time that should never be forgotten. For the 80th anniversary,…