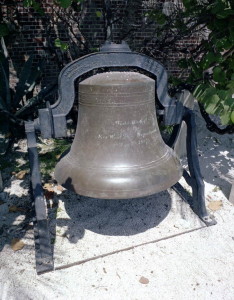 Fire has long been a very real and devastating threat to the wooden structures that comprise Key West’s Old Town neighborhoods. Long before battery-powered smoke detectors, interior sprinkler systems and automated 911 call centers, Key Westers had their own, early version of a fire alarm in the form of a 1,000-pound cast iron bell that hung from an elevated tower in the City Cemetery.

The fire bell tower was at the corner of Olivia and Grinnell Street from about 1910 until it was phased out in the 1950s and replaced by more technologically advanced warning systems. “It was straight down the street from the fire station at Simonton and Angela,” said retired Key West firefighter historian Alex Vega, who is also the founder of the Historic Firehouse Museum at 1026 Grinnell St., where the fire bell now resides.

The bell’s unmistakable reverberation could be heard everywhere on the island, and its sound stopped residents in their tracks as they listened for the number of “gongs” to determine the approximate location of the fire. Vega explained that turn-of-the-century technological advances in the early part of the 1900s allowed Key West to install more than 50 numbered “fire boxes” in neighborhoods all over town.

Each resident knew the number of the boxes closest to their home, and each had a card next to their telephones that listed the box numbers and their associated locations. If residents lived near the No. 23 fire box, they would listen for two, then three tolls of the bell.

Regardless of the location, a fire in Key West would always draw a huge contingent of onlookers as firefighters fought to save the surrounding wooden buildings. With or without the threat of a fire, the bell always had the power to send local teens scurrying home, as it doubled as the city’ curfew bell for decades. “Anyone younger than 15 had to be home by 9 p.m. when the bell rang each night,” Vega recalled.

The bell remains one of the most popular exhibits at the Key West Firehouse Museum, as it sits stoic and silent in the backyard of the museum. “We’ll tap it lightly when kids come through the museum,” Vega said. “And we ring it for real every year during our commemoration of 9/11.”

The firehouse that now houses the museum was built in 1907 and is one of the oldest fire stations in the country. Vega spent nearly two decades working to make the museum a reality, and is currently working on a new exhibit that will explore the history of the Key West Police Department. The museum is always in need of members, donations and volunteers. The museum is open 10 a.m. to 3 p.m. Tuesday through Saturday. Admission is $10 with discounts for locals and firefighters. Kids under 12 are admitted free.

To learn about the museum do to keywestfirehousemuseum.com or call 305-849-0678.