The historic houseboat estate on Upper Matecumbe Key sold recently for $3.8 million, according to Ocean Sotheby’s International Realty. Rich in history, this 5-acre property at 101 Carroll St. has entertained many dignitaries over the years, including President Harry S. Truman, President George H.W. Bush and legendary news anchor Edward R. Morrow. The centerpiece is a 60-foot 1948 Chris Craft houseboat that served as a rental unit for Clara May Downey’s Olney Inn, which later became Cheeca Lodge under new ownership. 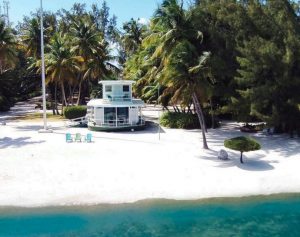 According to Upper Keys historian Jerry Wilkinson, Downey had the houseboat, Bay Bourne, towed to Islamorada from Miami in the early 1950s. The houseboat, which had been custom built for hotelier Baron Conrad Hilton, was moored next to the inn. In 1960, Hurricane Donna washed the Bay Bourne onto the middle of Preston Street. It was later rolled on telephone poles back to the place where it sits, permanently anchored to a foundation on the beachfront property.

Race car sponsor Jim Gilmore Jr. of Kalamazoo, Mich., later purchased the property and added a second deck to the Bay Bourne. It was owned by the Gilmore Houseboat Trust of Otsego, Mich., until the recent purchase. The houseboat features a stateroom, two baths, a galley kitchen and salon on the first deck, and a top deck with a four-bunk stateroom and private upper deck. The property also includes 300 feet of sand beach overlooking the Atlantic Ocean. The estate’s market value was estimated at $3.1 million by the Monroe County Property Appraiser in 2016.