One word keeps coming up, over and over again, when people talk about Harriette’s Restaurant in Key Largo: Family. And it’s not just owner Harriette Mattson, whose breakfast-and-lunch restaurant at mile marker 95.7, celebrated 34 years on May 17. 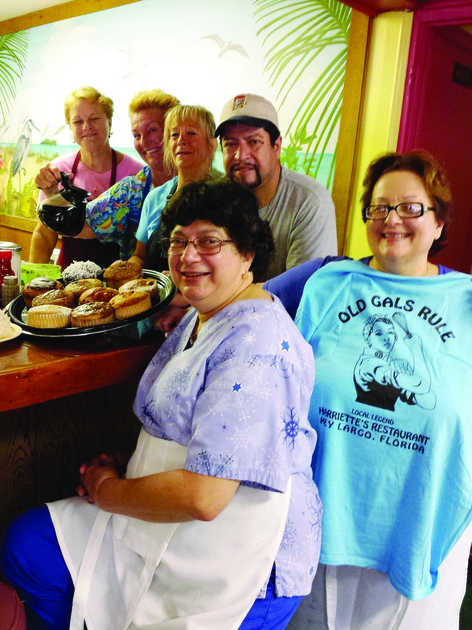 It’s the staff and the customers, too. Pat Baker, who has been at Harriette’s since the beginning and bakes Harriette’s signature Key lime muffin, said, “I’ve got the best boss. She’s a giving person and will do anything for anyone, even customers. It’s a family here.”Christina Collins drives 28 miles – each way – from her Lower Matecumbe home to work at Harriette’s. “She’s the best boss in the whole world,” said Collins. “She’s kind to the community and wonderful to work with.”Theresa Elias calls Mattson “the queen of hospitality,” adding, “It’s like working with family. She takes care of us all.” Mirna Narvaez of Tavernier has two daughters who worked at Harriette’s during their years at Coral Shores High School. Camilla and Elizabeth Roa, now students at Florida Atlantic University, still work at the restaurant during the summers. “Harriette is like a mother to my daughters,” Narvaez said. Mattson hosted a baby shower for Michelle Russell. Luke Popp’s grandfather sat at the same corner table for years, where every morning he read the newspaper and had breakfast. “I’m carrying on the tradition,” he said. So when Mattson says, “This is everyone’s home away from home,” it’s an understatement.  “Lots of people have met here and married and had kids who grew up in this place. It’s a safe haven. If there wasn’t a Harriette’s,” she said, “how many lives would be different today?”Mattson works 12-14 hours in the business every day, except for Thanksgiving and Christmas. You guessed it: Those are “family days” and the restaurant is closed. The Ohio native and her husband Ron moved to Miami in 1959. Mattson, who has a degree in early childhood education and psychology from Florida International University, commuted from the Keys for seven years to her job at a private preschool in Miami. Then, in 1976, the Mattsons’ lives took a sharp turn. She and Ron, who passed away in 1989, were planning to live in Honduras where Ron had started a fish farm.“Ron was there for a year; I was there for about three weeks,” she recalled. “We were thinking of opening a B&B.”But things turned ugly when the man who leased the property to the Mattsons wanted it back – and Ron refused. While visiting home in Florida, he was threatened with arrest if he ever returned to the Central American country. “We lost everything,” Mattson said. It was decision time: Go to Fort Myers, where Ron had family, or move to the Keys. The Keys won out.They ended up with the restaurant property at mile marker 95.7, which had been vacant for several years.  Ron originally planned to open a repair center there for his Keys Mobile Home and RV Service business. Mattson said she didn’t know until the day before closing that Ron wanted to open a restaurant there instead. “I said, ‘Oh God. Really?’” she remembered. “We basically started with nothing,” Mattson said. Running the restaurant “was a crash course. We learned everything as we went along.” And it became her home away