These days, most merry-go-round horses are made from molded fiberglass and plastic. However, in the days when they were carved from wood, most of them were made from gumbo limbo, Bursera simaruba. Gumbo limbo is one of the most recognizable trees in the tropical hardwood hammock of the Florida Keys. Its red, peeling bark has earned it the nickname “the tourist tree,” because of the resemblance to our visitors who don’t remember to apply and reapply their sunscreen. 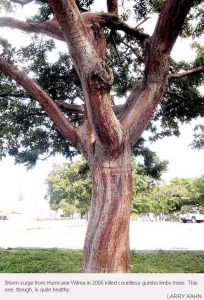 The gumbo limbo can be found in South and Central America, the Caribbean and South Florida. It is a fast-growing tree that does not mind moderate amounts of salt spray or our hard, calcium-laden soils. During periods of drought, the tree responds by dropping leaves, but otherwise remains green year-round. The gumbo limbo has a very thick and sticky sap. Natives would use this sap as a bird-lime, a trap for small birds. Florida pioneers called the gumbo limbo the “living fence.” They found that almost any branch could be stuck in the ground and it would grow. Settlers would mark the boundaries of their property with gumbo limbo branches that quickly grew into trees.

Their flexibility and wind-resistance made them a valuable windbreak during hurricanes. However, we now know that this is not a good way to grow them. Placing them into the ground from broken branches can lead to decay, as well as a tree that is not structurally sound. In the Caribbean and South America, all parts of the gumbo limbo (leaves, bark, roots, etc.) have been used medicinally. Its resin has been used as incense, glue and varnish since pre-Columbian days. For Keys residents, it is a good tree for landscaping a native yard.

The flowers are not showy, but the fruit draws many birds, both year-round and migrating species. Once established, the gumbo limbo requires no irrigation. A large tree’s trunk will even swell up when there is lots of rain. The tree has very few pest issues, but it sometimes attracts whitefly or scale. These insects won’t kill the tree, but they will excrete nectar on which a black fungus called sooty mold will grow. You won’t want to plant one near where you park your car.

To see some beautiful specimens of gumbo limbo, be sure to visit any of the Florida State Parks in the Keys. Dagny Johnson Key Largo Hammock Botanical State Park, located on County Road 905 in north Key Largo, is a great example of a tropical hardwood hammock, which is found nowhere else in the United States, except in South Florida. Here you can see gumbo limbo trees and other beautiful native trees, such as wild tamarind and mahogany. A partially-paved path leads you through an undeveloped forest of tropical trees. The park is open from sunrise to sunset, and the entry fee is $2.50 per person. The park is pet-friendly for pets on leashes and suitable for walking or biking. Plan your visit to “the Real Florida” at floridastateparks.org.