Florida’s native fish and wildlife are facing a serious threat posed by a variety of invasive species found throughout the state. The Florida Fish and Wildlife Conservation Commission (FWC) is taking steps to combat the introduction and spread of these non-native animals. Today, the Commission voted to approve a reorganization of rules related to non-native invasive species.

In addition, the Commission requested FWC Executive Director Eric Sutton and Vice Chairman Robert Spottswood to work on a temporary executive order to limit the importation of potentially high-risk injurious species. This will act as a stopgap measure while staff develops proposed rules.

“As we are in the process of rule development, we need an Executive Order in place to take the pressure off until we are ready to take the final action,” said Spottswood.

What are Invasive Species?

Invasive species are animals not native to Florida that cause economic or environmental harm or pose a threat to human safety. More than 500 non-native species have been reported in Florida. Eighty percent of these have been introduced via the live animal trade with over 120 established in Florida, meaning they are reproducing in the wild.

“It costs much less to prevent a species from becoming established than it does to control them once they are here,” said Commissioner Joshua Kellam. “What we need to do as a Commission is focus on prevention early on to stop the next wave of invasive species.” 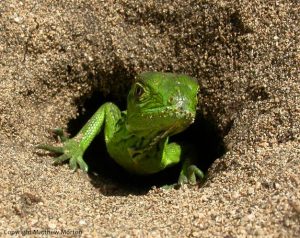 Although invasive species are not a problem unique to Florida, the state’s subtropical climate allows a variety of species, such as pythons, Argentine black, and white tegus, green iguanas, monitor lizards, and many invasive freshwater fish species, to thrive.

How do we get Invasive Species?

Most non-native fish and wildlife find their way into Florida’s habitats through escape or release from the live animal trade. Therefore, regulation is an essential component to prevent non-native species from taking hold in Florida’s environment.

“We are taking proactive steps through regulation to address those species that pose the highest risk to Florida of becoming tomorrow’s invasive species problem,” said Kipp Frohlich, Director of the FWC’s Division of Habitat and Species Conservation. “Actions we take today can prevent other species from becoming established and help avoid problems similar to the ones caused by the Burmese python.”

The public can help the FWC control non-native invasive wildlife by reporting sightings to the FWC’s Exotic Species Hotline at 888-IveGot1 (888-483-4681), online at IVEGOT1.org or by using the free smartphone app IVEGOT1.

What can you do about Invasive Species?

The Lionfish Challenge rewards lionfish harvesters withs for lionfish removals. Those with the most lionfish will be crowned the Recreational Lionfish King/Queen and the Commercial Champion.

The Florida Fish and Wildlife Conservation Commission (FWC) invites Florida residents and visitors to take an active role in conservation by reporting fish and wildlife observations with the new FWC Reporter app. From fish kills to exotic species, to trapped or injured wildlife, FWC Reporter connects citizens to FWC experts directly from their Apple or…

At its April 13 meeting in Jupiter, the Florida Fish and Wildlife Conservation Commission (FWC) approved a two-part lionfish removal plan to further encourage removals of the invasive species in 2016. Lionfish have a potential negative impact on native wildlife and habitat and the FWC encourages divers and anglers to remove them from Florida waters…

Has Cuba impacted our environment? Here are three species that have made the leap. CUBAN BROWN ANOLES This little lizard has an aggressive streak. Swiftly, quietly, the brown anole has overrun Florida. Sometimes called the Cuban anoles, they have become the most abundant vertebrate on Florida land, with recorded populations exceeding 10,000 per hectare. But really,…

Jackson Landers grew up in a vegetarian household. Now he hunts and butchers much of his own meat. In the past five years, he’s focused on hunting and eating invasive species. In his book, Eating Aliens: One Man’s Adventures Hunting Invasive Animal Species, the 35-year-old Landers chronicles his travels around the country as he learns to hunt,…