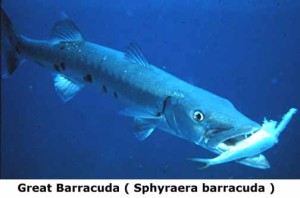 A final decision on new rule to protect barracuda in South Florida goes to the Florida Fish and Wildlife Commission at its Sept. 3 meeting in Fort Lauderdale.

Barracuda, a popular catch for Florida Keys flats fishermen and a familiar sight to Keys divers and flats fishermen, currently lack harvest limits that safeguard the populations of other marine predators.

“While statewide commercial [barracuda] landings have been lower in recent years than the mid 1990s, the landings from Monroe County have increased dramatically the last two years,” says an FWC staff briefing report.

“This corresponds with concerns from stakeholders in the area who have reported increasing commercial interest in this species,” the report says.

A slate of proposed rules includes:

– a daily recreational bag limit of two barracuda per person;

– a commercial trip limit of 20 barracuda per vessel, per day; and

– a size slot limit of 15 inches to 36 inches, to protect small fish and larger breeding stock.

If approved by the FWC at its Sept. 3 session at the Hilton Fort Lauderdale Marina, the regulation would take effect Nov. 1 in an area from Martin County south through the Keys, and include Collier County on the Southwest Florida coast.

Currently, barracuda fall under a general rule that allows recreational fishers to take up to 100 pounds of barracuda per day. There are no limits for commercial fishermen.

More than 50 people turned out at a Key Colony Beach workshop this spring, with most supporting more regulation. “In general, there was broad support throughout South Florida for barracuda management,” FWC staff wrote. The Lower Keys Guides Association was a primary supporter of the barracuda plan.

“A pretty broad swath of the recreational-fishing community showed up [at the FWC’s June meeting] and everybody was on board with this,” said Will Benson, vice president of the Lower Keys Guides Association. “I think we got something done.”

No one knows how many barracuda swim off the Florida Keys and South Florida. No stock assessment has ever been done on the species. Anglers say barracuda are critical to the marine ecosystem, and provide a sportfishing thrill in winter months when many flats species head for deeper water.

Last November, the FWC board expressed concern about adopting rules on barracuda without a better understanding of the species population. But with no money to fund a barracuda study, commissioners seemed persuaded by public opinion to move forward with the South Florida rules.

Some Keys charter captains asked the FWC to allow the harvest of one fish over the maximum 36-inch size, but staff recommends keeping the limit as suggested.