A surprise discovery along the south Florida coast has revealed dense thickets of a species of Staghorn coral thought to be disappearing from the region’s reefs. 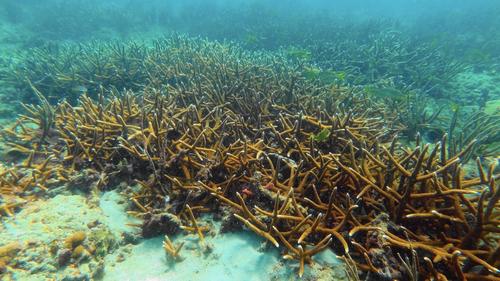 More than 38 acres of staghorn coral have been found in patches on the reefs from northern Miami-Dade County to northern Broward County, in what scientists call a rare piece of good news for a species that has seen severe declines, largely because of disease.

“This is a huge win for Florida’s corals,” said Joanna Walczak, southeast regional administrator for the Florida Department of Environmental Protection.

Staghorn coral, which extends delicate branches up from the ocean floor, is among the most important coral species for its ability to build reefs, creating habitat for fish and other marine creatures and providing a natural wave break that protects the coast.

The dense patches of the federally protected coral were discovered through dives and the analysis of aerial surveys. Although many of the coral concentrations lie far from shore, some are accessible to divers.

A scientist from Nova Southeastern University‘s Oceanographic Center found the coral while doing a survey for the environmental agency, which wanted a better map of the shallow reef system.

“This was an unexpected result of a project that was intended to improve our knowledge of the types and locations of near-shore reef habitats in southeast Florida,” said Brian Walker, a research scientist at Nova’s National Coral Reef Institute who conducted the study.

When diving the sites, Walker saw a variety of marine creatures swimming and creeping around the corals. He saw reef croakers, fireworms and sea hares (a type of mollusk named for two ear-like appendages). He saw threespot damselfish, which cultivate algae “gardens” on the corals by weeding out the algae species they don’t plan to eat.

The northern limit for the species is roughly around Boca Raton, but in the past, it was densest in the Florida Keys. The species has been disappearing there, however, battered by coral bleaching and other problems.

Higher water temperatures contributed to the decline, touching off more frequent incidents of bleaching. That occurs when corals expel the algae on which they depend for energy, making them more vulnerable to disease, according to the National Oceanic and Atmospheric Administration.

Ironically, that same warming may have made the water temperatures of Miami-Dade and Broward counties more hospitable for the species.

“Some have speculated that climate change might have contributed,” Walker said.