Florida Keys Sandbar. Dropping anchor or tying off at shallow sandbars has, in the last quarter-century, mushroomed at dozens of gathering spots from the Upper Keys to the Marquesas, a new state report says. The fastest-growing segment of Florida Keys boating activity seems to be one where people don’t go anywhere.

Islamorada’s Whale Harbor Channel may be the largest, oldest and most visible example. 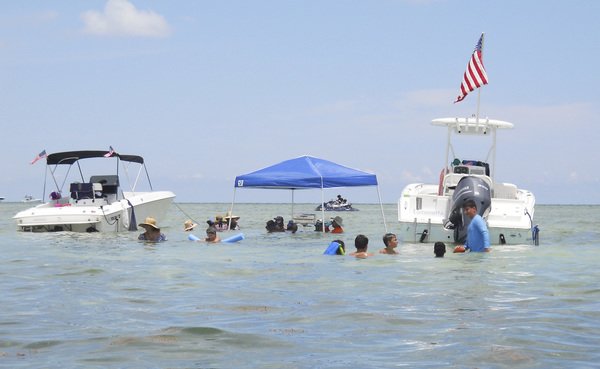 “In 1992, we had maybe five or six of these ‘sandbar’ or ‘party zones’ — we’re struggling with what to call them,” said Tom Matthews, research administrator at the Florida Fish and Wildlife Institute in Marathon.

“Now there are probably about two dozen,” he said. “Probably the biggest change [in boating activity] is the increase in these sandbar areas.”

Matthews served as lead author of “Vessel Use in the Florida Keys National Marine Sanctuary,” a newly released 176-page report on a project that made 29 survey flights between Feb. 2, 1976, to Jan. 21, 2017.

Results of the 2016 survey now will be compared to a similar project undertaken in 1992. That work now is underway.

Weather conditions, seasons and holiday periods cause wide fluctuations in day-to-day Keys boating. Memorial Day often is a hugely popular time for Keys boats. “It was a gorgeous day in 2016,” Matthews said, noting a one-day count sandbar activity of 1,200 boats at the various anchoring spots. The Whale Harbor Sandbar alone had 331 boats when surveyed.

“Whale Harbor is unique in that it consistently has more boats than other sandbars,” says the new report. “Boats at Whale Harbor accounted for 31 percent of the boats observed at sandbars during the survey.”

“A couple of things conspired to make this the peak count” during the 2016 survey period, Matthews said, “but [large gatherings] are not unusual.”

Members of the Florida Keys National Marine Sanctuary Advisory Council were briefed on the boating survey at their June meeting. Council member Chris Bergh of The Nature Conservancy said he understands boaters at sandbar gatherings “love it,” but worried allowing unchecked proliferation of the activity could deprive shorebirds and wildlife of critical habitat.

“That means these [shallow areas] are not what they used to be,” Bergh said. “Not every sandbar should be that.”

“Valhalla and Molasses Key are considered moderately-sized sandbars” in the Marathon area, the report says.

The boating survey looked at areas from the Upper Keys to the Dry Tortugas, and attempted to record “activities of the people on the boats.” Those include recreational and commercial fishing, diving, sailing, lobstering and watersports (paddlecraft and personal watercraft).

“We can pretty much see boats and what they’re doing from three miles away,” Matthews said. About a third of the boats were moving when logged.

Other observations from the report:

• Winds in excess of 15 mph notably curtailed boating. Most of the boats that ventured out on windy days stayed near bridges or went to the gulfside.

• About 65 percent of boats were counted on the oceanside.

• “Watersports” activities have increased as a segment of the boaters. As an activity, “paddleboards and kayaks barely existed in 1992,” Matthews noted. Now paddlers comprise 4.5 percent of boating activity logged in the survey. Other aspects of watersports include personal watercraft (3.8 percent of all boats), parasailing, and tubing or water-skiing.