The Florida Keys Reef Lights Foundation has received permission from the Coast Guard to replace the zinc anodes on the Florida Keys Reef Lighthouses Carysfort, Alligator, Sombrero and American Shoal reef lights, according to foundation officials. Zinc anodes, which serve as a sacrificial metal, are used to preserve the iron legs of the lights, much as anodes are used to protect the lower units of outboard engines and other metals below the water line on boats. 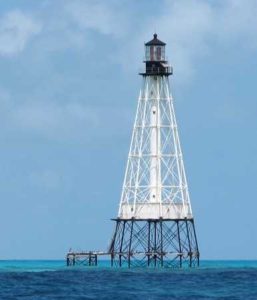 Due to budget cuts, the lights have not received basic maintenance in many years. In May 2015 the Florida Trust for Historic Preservation noted all six of the Florida Keys reef lights as being among the “Most Endangered Historic Sites” in Florida. Eric S. Martin, president of the Florida Keys Reef Lights Foundation, has been in contact with the Coast Guard regarding the maintenance of the Keys lights for many years. The foundation has worked with Biscayne National Park on initial stabilization and restoration of Fowey Rocks light and has raised $77,000 toward that effort. The foundation is a 501c3 charitable organization and can be contacted through reeflights.org

Ever wondered about Florida Keys Names and why certain locations are named as they are? You may be on vacation in the Florida Keys, or a resident, and asked that question. If you’re boating and come across Alligator Reef, don’t think the name means it’s overrun with reptiles. The reef was named after the USS…

The Key West Greyhound Track was once billed as the Tiniest Track in America, this oval was located amid auto graveyards and cheap trailer parks in the poorest section of America’s most southeastern town. [this was actually on Stock Island] It was the literally the last stop on the road for young pups or aging…

It’s fitting that a family passionate about aviation would live in a house that looked to many so much like a spaceship. Most people living in the Upper Keys have seen the house in the Venetian Shores subdivision on Plantation Key known locally as the UFO house. But not many remember who lived there, why it…

The presence of the US Navy in Key West dates back to 1822, when Lt. Commander Matthew C. Perry sailed the Navy schooner Shark into Key West Harbor and claimed the island for the United States. Only about 100 people lived here at that time. Although Florida had become a US territory a year earlier,…